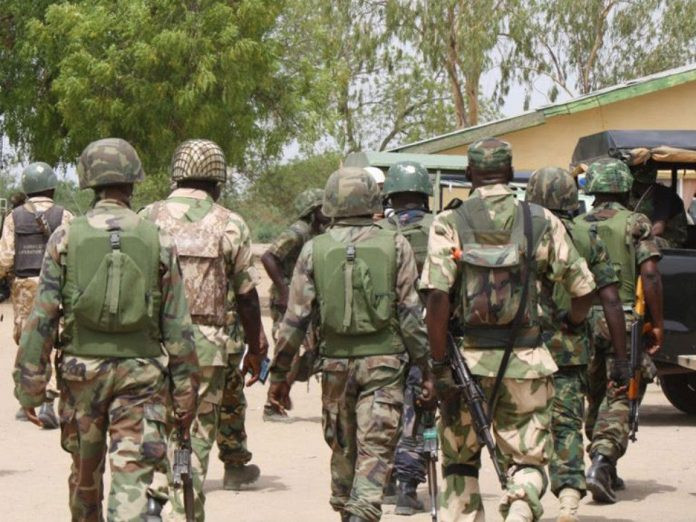 Widow narrates how soldiers killed her son, nephew and labeled them unknown gunmen

A widow, Edith Amadi, has narrated how her son, Onyebuchi Anthony Amadi, 27; and nephew, Obinna Onyebuchi Egekwu, 30, were allegedly killed by security personnel in the aftermath of the attack on the State Police Criminal Investigation Department, CID structure, Umuahia, Abia by unknown gunmen.

The 46-year-old widow, who hails from Oforola in Owerri West Local Government Area of Imo State, lost her husband in 2009.

Narrating her ordeal to Vanguard in her Umuahia residence, she accused the Nigerian Army of murdering her son and others in cold blood.

She said her son, nephew and another boy simply identified as “ Onye Photo” ( photographer) were arrested in their family house at Ugwunchara Umuahia, hours after the attack.

The window said her son and other victims whisked away from their family house were not members of the gang of the unknown gunmen that allegedly attacked the police station, and wondered the justification in their extra-judicial killing.

She said: “ On that Saturday when my cooking gas finished I called my son and he came in a chattered Keke (tricycle), collected the gas cylinder, went to a gas station, refilled it and returned it to my restaurant at Awolowo street.

“ After refilling the gas he cut the okra for me and asked me to call him when the soup is done. He then returned to the house.

“ After some time, somebody called me and asked me if I was aware of what was happening in town. I said I wasn’t. Then we started noticing some strange movements everywhere. People started running here and there.

“ Then I called my son and asked him to check out for Anointing, my 8-year- old grand daughter who I gave soup to take to the house. He now went to look for her.

“ But after a while I saw Anointing running back to the shop and I went and grabbed her. I then called back my son and asked him to return to the house because I have found Anointing.

“ My son then returned to our family house where he was staying with my elder sister. My sister said he retired to his room where he was joined later by our elder brother’s son, Obinna who was returning from work and decided to branch off at the house due to the crisis in town.

“ Both of them were inside the room while my sister, and some of her children were also in the house. But unknown to them soldiers had surrounded the vicinity, breaking into homes and arresting people.

“ Other people in the neighborhood who noticed the development on time ran away but because my son and his cousin were inside the room unaware of the military invasion, they could not run.

“ So the soldiers broke into the compound and asked everybody to lie down. They were breaking into rooms and bringing people out including my sister and her children.

“ They were still lying down there when another boy popularly known as Onye Photo living in the neighborhood was returning home and they forced him to also come over and lie down.

“ Shortly afterwards, they marched three of the boys – my son, his cousin and Onye Photo to unknown destination and left others.

“ Then later that evening we went to the Central Police Station Umuahia in search of them but one Hausa Police officer with long machete chased us away and threatened to kill us if we came closer.

“ Then on Sunday we went to the Army camp at ADP Ossay Umuahia but one man told us not to come close. We later went to Ntigha and Owerrinta but were told Army had no base at Owerrinta.

“ We were planning to go to Ohafia Army barracks on Monday despite the sit-at-home order. But on that Monday the news was on the internet that police said some unknown gunmen were killed and their corpses deposited at the FMC Umuahia.

“ Then when we got to FMC we saw the corpses of our children brutally murdered by security men. The hospital told us to bring papers from the police and our traditional ruler before releasing their bodies to us”.

“My son was not among unknown gunmen. He was a tailor who just completed his apprenticeship. My nephew was running a printing Press and never belonged to any violent group. Nigeria Army has brought misery to my life by killing the most quiet of my children”, she lamented, bursting into cry.

Corroborating her account, the widow’s elder sister, Mrs. Ngozi Nwachukwu who was with the victims when they were arrested said it was the most horrifying moment of her life.

She said the Army invaded their house hours after the unknown gunmen had left the scene of attack and started indiscriminate arrest of innocent youths in the vicinity.

Pointing to a little boy of about seven years, Mrs Nwachukwu who was fighting back her tears as she narrated her ordeals said ‘the Army even ordered this boy to also lie down with us’ .”

She demanded justice over the murder of the victims vowing to use her last breath to seek justice.

There were other victims of the alleged extra-judicial killing including a tricycle operator allegedly shot dead inside his ‘Keke’ by security operatives around ShopRite junction Uwalaka Street on Saturday.

But efforts to get reaction from the Army were unsuccessful as the Deputy Director of Information, Army 14 Brigade Ohafia, Capt. Iliya Dauda did not pick calls put across to him.

As at the time of filing this report, he was also yet to respond to a text message sent to him.

Further efforts to extract response from the Brigade Commander, 14 Brigade Ohafia, Brig. Gen. M Ibrahim did also not yield any fruit as he simply responded:”I am in AHQ Abuja as DD PS”.

Similarly, the Police Public Relations Officer PPRO Geoffrey Ogbonna did not pick calls put across to him though they all rang out.