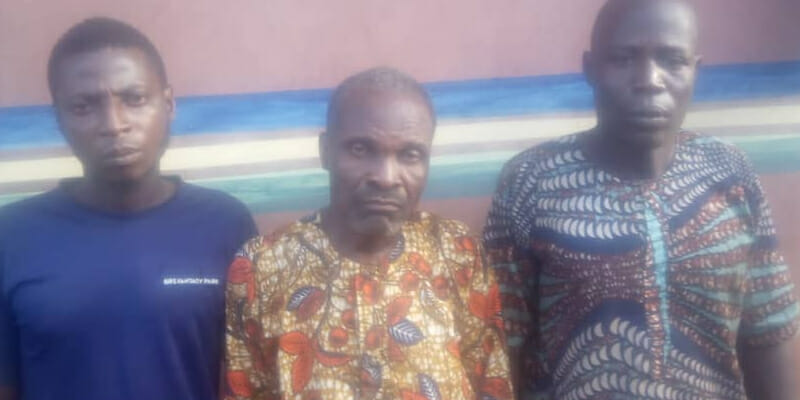 Three arrested while exhuming corpse for ritual purposes in Ogun

Operatives of the Ogun State Police Command have arrested three men while exhuming the corpse of one Segun Taiwo who was buried about six months ago at Abule Sikiru area of Sabo Abeokuta.

Spokesperson of the state police command, DSP Abimbola Oyeyemi, who disclosed this in a statement identified the suspects as; Sunday Aregbede, Salisu Mamud, and Bosere Rasaq.

Oyeyemi said the suspects were arrested at about 11:30 p.m. following a distress call received from one Chief Felix Obe who informed the police at Ilupeju Divisional Headquarters that he sighted some men digging the grave where a 28 years old man was buried about six months ago. He stated further that he didn’t know the intention behind the action of the said people.

Upon the information, the DPO Ilupeju Division SP Mustapha Opawoye quickly led his men to the scene where the three suspects were apprehended with an already exhumed corpses with the help of members of the community.

Preliminary investigation revealed that the suspects exhume the corpse in order to use part of it for money-making rituals.

The Police PRO said the commissioner of Police, CP Lanre Bankole has ordered the immediate transfer of the suspects to state criminal investigation and intelligence department for discreet investigation with the view to charge them to court as soon as possible.