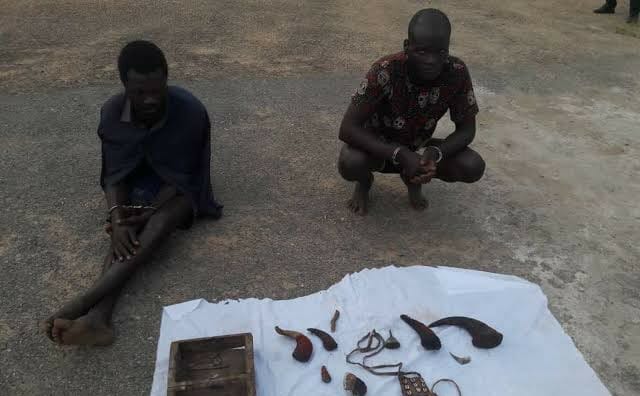 The Police Command in Oyo State on Wednesday, said it had arrested two suspected ritualists, Ismaila Wasiu, Mutairu Shittu and recovered fresh human head from them.

This is contained in a statement issued by the Police Public Relation Officer (PPRO), DSP Adewale Osifeso, on Wednesday in Ibadan.

Osifeso said that the Police received credible intelligence from residents of Ayekale, Saki Area of Oyo State, at about 2:30pm on Monday.

He said that the residents alleged the duo of Ismaila Wasiu ‘m’ age 29 yrs and Mutairu Shittu ‘m’ age 35yrs, to have been found in possession of a fresh human head.

“Oyo State Police Command attached to Saki Divisional Police Headquarters immediately swung into action which resulted in the arrest of the duo, the recovery of the fresh human head and the dismembered body of the victim who has been identified to be one Mujidat ‘f’

“Preliminary investigation reveals that the victim was lured from Lagos through a phone call by one of the suspects, particularly Ismaila Wasiu before the perpetration of the dastardly act”, he stated.

Osifeso said that the investigation into the incident was ongoing and the dismembered body of the victim has been deposited in a morgue.

“The dismembered body has been deposited at the morgue, while intensive investigations regarding the incident continues”, he added.