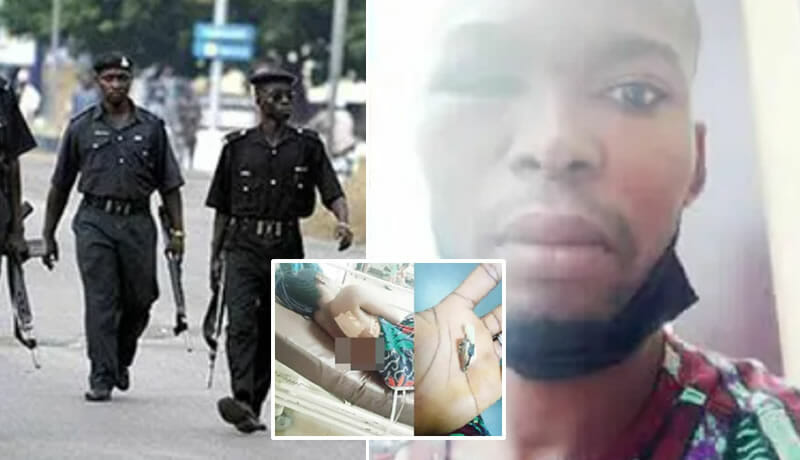 Police officers allegedly shot fashion designer, Rukayat Salami, in the stomach at a checkpoint at Lucky Fibre, in the Ikorodu area of Lagos state and battered the husband, Ibrahim for complaining about the shooting.

It was gathered that a tricycle operator had wanted to pass the checkpoint when an argument ensued between him and the cops over N100.

The matter reportedly degenerated as the policemen opened gunfire. In the ensuing melee, bullets hit 34-year-old Rukayat in the stomach.

According to PUNCH, the victim, who had been bedridden since the incident happened last Sunday, said her husband had driven past the roadblock when she was hit by bullets.

“I started shouting and alerted my husband. Immediately, he placed his hand around my stomach and observed that I was bleeding. He parked the vehicle, went to start arguing with the policemen. By the time he returned, he was bleeding in the head,” she added.

Ibrahim, a surveyor, said the policemen brutalised him for calling their attention to his wife’s condition.

He explained that the incident happened while they were returning from a visit to an in-law, adding that despite he and his wife bleeding profusely, the policemen abandoned them and drove away in a minibus.

Dowen College: Sylvester was in severe pain day I picked him from…

The father of four said, “The incident happened around 8.30pm on Sunday when we were on our way back from my in-law’s house at Agunfoye, in Adamo, Ikorodu. We approached a police checkpoint and saw policemen collecting money from commercial drivers plying the axis.

“As I drove past the checkpoint, we suddenly heard gunshots and my wife started screaming that she had been shot. She started shouting that she needed water, but as I stretched my hand to examine the side of her stomach, I observed that she was bleeding.

“I quickly parked my vehicle, got down and went to meet the policemen to tell them that they had shot my wife. While writhing in pain, my wife was telling me to be careful so the policemen won’t shoot me. The policemen and I engaged in a shouting match until one of them used a heavy object to hit my head and I started bleeding.”

The Kwara State indigene said he rushed his wife to the Ikorodu General Hospital, from where she was transferred to the Lagos State University Teaching Hospital for surgery.

While lamenting that over N150,000 had been spent on Rukayat’s treatment, Ibrahim demanded the arrest and prosecution of the policemen involved in the incident.

He said, “When I rushed my wife to the emergency unit of the Ikorodu General Hospital, she was stabilised. The following day, my wife was referred to the Lagos University Teaching Hospital, but they rejected her because of bed space.

“We informed officials of the Ikorodu General Hospital. But while returning there, one of the officials called and told us to go to LASUTH, where a bed space had been secured for us. She was admitted there and we did an X-ray which revealed that two bullets were in her system.

“They also said blood was in her chest; they told us to buy some medicine and other things they needed. After we got them, she underwent surgery. They removed a bullet from her body, but the second bullet was not removed as the doctors said it would be suppressed with antibiotics.

“My wife has spent five days in the hospital. I reported the case at the Sagamu Road Police Station and was told an investigation would be conducted. I want those policemen to be prosecuted.”

A picture seen by our correspondent showed that Ibrahim’s right eye was swollen after the attack.

A bullet extracted from Rukayat’s body was also sighted.

The couple said they would present the bullet to support police investigation into the incident.

When contacted, the state Police Public Relations Officer, CSP Adekunle Ajisebutu, said he would get back after getting a brief on the incident.

He had yet to do so as of the time this report was filed, PUNCH reports. 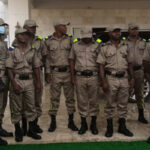