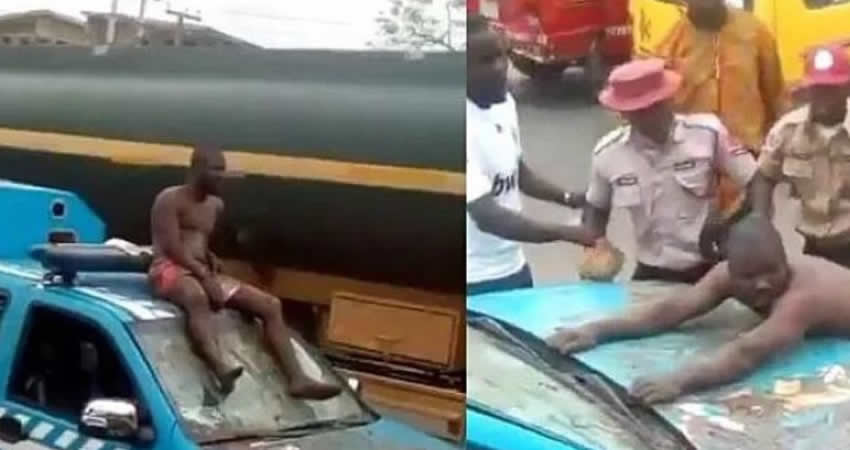 Kazeem explained that the erring tricycle rider has been punished while the disciplinary panel had awarded members of the patrol appropriate punishment.

The statement added that the seven-man patrol team involved in the incident has been sanctioned “loss of seniority and reduction in rank”.

In the viral video that surfaced online, the tricycle rider was arrested in Benin, along Benin/Sapele road on Thursday, 16 July 2020 for allegedly driving against traffic.

He later went berserk at the point of arrest, stripped himself naked, and started throwing obstacles on the FRSC patrol vehicle.

Reacting, the patrol team members applied force against the rider.

Grave robbers who use body parts for rituals arrested in Edo

In the statement on Monday, Kazeem said, “The attention of FRSC has been drawn to an old video currently been recirculated on the social media showing an erring tricycle rider who went on a face-off with FRSC patrol team after been caught destroying patrol vehicle along Sapele road Benin, Edo state.

“Corps wishes to inform the general public that the incident did not just happen as purportedly misrepresented by social media operators.

“The video was recorded in Benin, along Benin/Sapele road on Thursday, July, 16,2020 and the Staff involved have been adequately disciplined in accordance with FRSC Regulations on Maintenance of Discipline at the instance of the Corps Marshal, Dr Boboye Oyeyemi and the outcome of the trial made public on August 2, 2020.

“However, A Magistrate Court sitting in Benin City, Edo State on Monday, January 11 2021, sentenced the culprit, Mr Adeshina Adeyemo, the tricycle operator to three months imprisonment for attacking the patrol operatives and damaging of patrol vehicle belonging to the FRSC.”

The statement also quoted the Corps Marshal of FRSC, Dr Boboye Oyeyemi, as admonishing “the perpetrators of such media propaganda to desist from heating up the polity at this sensitive moment of the national development, and fashion out measures that could enhance peaceful coexistence, rather than ignite anger and violence”.