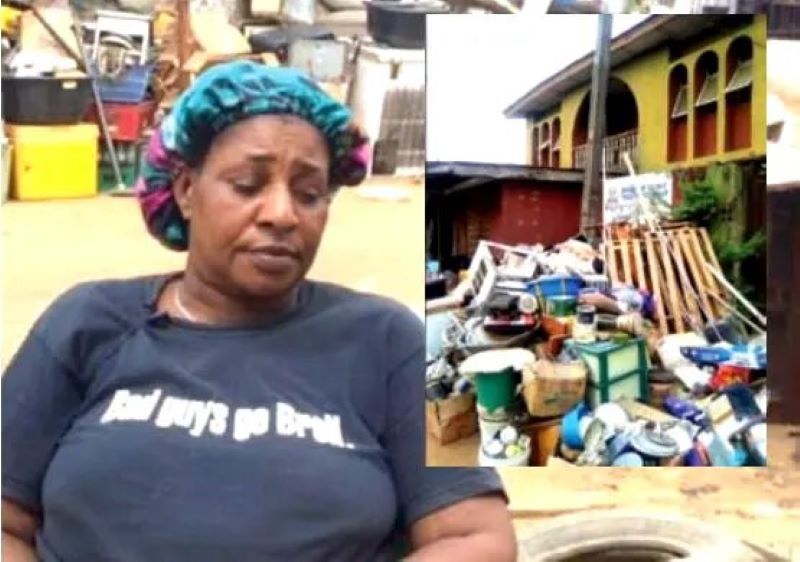 49-year-old widow, Mrs Funmilola Ajiyo, has narrated how some family members conspired with her lawyer, Faniyi, to confiscate everything her late husband, Lawrence Ajiyo, who died in a cooking gas accident on April 24, 2011 left behind.

According to Vanguard, Mrs Ajiyo, who has been thrown out of her Oreofeoluwa Crescent, Governor’s Road, Ikotun, Lagos, matrimonial home, said she met Lawrence in 1999 and got married in 2006, but said not long after his death, family members hired a lawyer to help them process the letter of administration, without her knowledge, as she had already hired a lawyer over the same purpose.

She claimed to be the only legal wife of late Lawrence and mother of his daughter, Precious Ajiyo

On Friday, January 14, some police officers, who claimed to be court sheriffs from the Lagos High Court took possession of her matrimonial home without prior notice to quit and threw all her belongings outside.

Speaking with Vanguard, she said: “As I speak, they have evicted all my tenants (about seven) from their apartments, and taken over my matrimonial home. I can no longer sleep with my two eyes closed because of the threat to life. I’m calling on all Nigerians to come to my aid. My
life is in danger.

“I had to take my only daughter to boarding school just to save her as well from being attacked. All I want right now is justice.”

When contacted on phone, Faniyi denied the allegation, saying the widow was being “greedy” and “playing the victim card.”

When asked to identify the documents given to him by Mrs Ajiyo, he responded: “I can’t identify anything offhand now. Though she handed over some title documents to me, those documents belong to her husband and not hers. She is getting so many things wrong.

“And she is not the only wife. There are four other wives. I got to know that there was a fourth wife that the man (deceased) married after her.”

“She doesn’t know what she wants. She was just daydreaming thinking she could take over everything left behind by her husband. I’m a Yoruba and I know customs and laws. I wouldn’t want anybody to blackmail me.”

Speaking about his relationship with Funmilola’s stepson, Olalekan Ajiyo, the lawyer claimed he only knew him as being a member of the family and had never seen him before: “I haven’t seen him (Olalekan) in person. I only know him as one of the members of the Ajiyo family.”

In his reaction, Olalekan, the eldest son of the late Lawrence, in a telephone conversation with Vanguard, said: “My mother is the first wife. After my mother, we have two other wives before Funmilola.

“So, she is the last wife and not legally married to my father. If she claims she is, let her bring evidence to back her claims. She was married just like every other wife.”