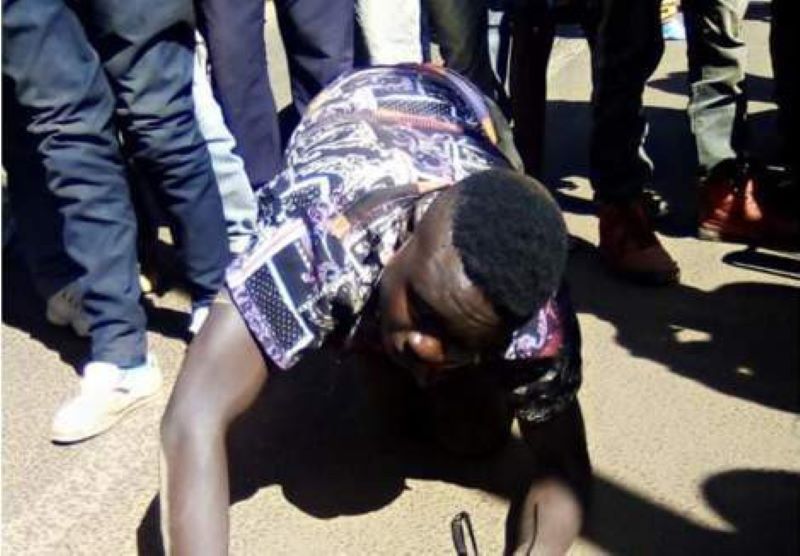 A Kenyan man accused of stealing livestock on Wednesday started walking like a cow and eating grass along Kitale-Eldoret Highway in the in Trans Nzoia county.

According to K24 Digital, an eyewitness, Peter Wafula, said that the man was suspected to be a member of a criminal gang that has been stealing livestock and robbing shops in Trans Nzoia.

Wafula noted that the incident occurred two weeks after a farmer in Shimo la Tewa area lost his bull to thieves who later slaughtered it in a nearby forest. He claimed that the farmer had promised to teach the thieves a lesson.

The eyewitness said; “The farmer was so angry and he promised to teach the culprits a lifetime lesson. This could be one of the promised lessons”

Another witness, Simon Maingi, claimed that at the time of the incident, the accused could not speak and their efforts to stop him from eating grass bore no fruits.

Maingi said; “We were shocked to see him walk like a cow and the worst thing is that he was eating grass. We tried talking to him but the man was unable to speak”

The eyewitness further revealed that the accused was heading towards the direction where the bull was allegedly slaughtered, a move he said connected him to the previous theft that the farmer suffered.

Maingi added; “Stealing is dangerous. We the youths should never think about stealing because you can end up grazing like this man, risk being jailed or even being killed by the mob.”