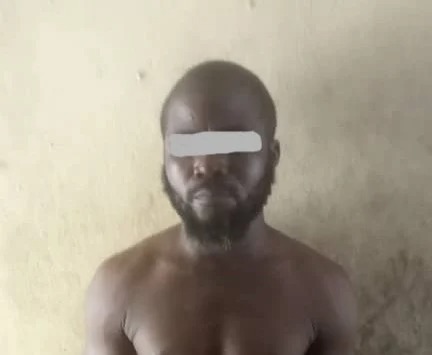 Operatives of the Imo State Police Command have arrested Uzoma Egemba for scalding the buttocks, thighs and body of his 12-year-old maid for riding his children’s bicycle.

The suspect was arrested at his Umuguma residence in the early hours of Thursday following efforts made by some concerned citizens, led by social media influencer, Darlington Ibekwe, and an activist journalist, Chidiebube Okeoma.

Egemba, who blamed the devil for his action said that he burnt the girl’s body on Sunday after he saw her riding the bicycle he bought for his children.

The concerned Nigerians took interest in the girl’s case following a video clip made by her school teacher which went viral on Wednesday.

Okeoma thereafter took the girl to Imo specialist hospital Umuguma- Owerri, where she was admitted.

At the hospital, the member representing Mbaitoli State Constituency, Okey Onyekanma, where the girl hails from, representatives of the National Human Rights Commission, members of the Owerri branch of the Nigeria Bar Association, and an activist, Uba Dinamuta, came and vowed to ensure the child gets justice.

According to PUNCH, one of the doctors, who refused to disclose her identity, said that the injuries the girl sustained from the burning were deep.

She said that the girl would spend time at the hospital to enable them to take care of her.

The mother of the girl, Amarachi Jude, said that she needs justice.

The state police spokesperson, Michael Abattam, said that he had not been briefed.