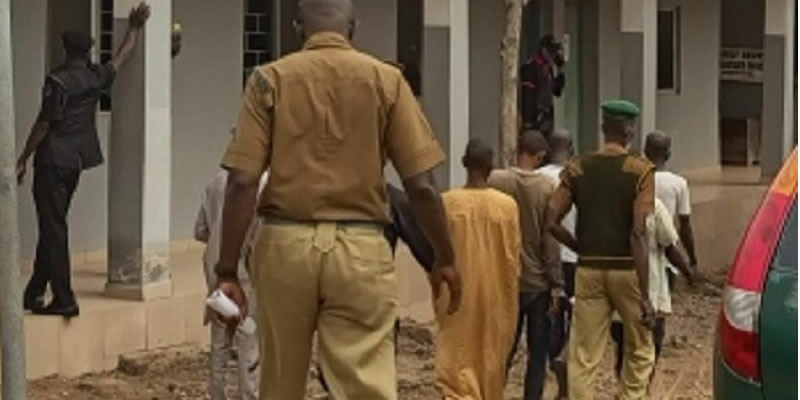 A farm worker, Isiaka Sabi, and his accomplices have been remanded in prison custody for allegedly killing his boss, Jamiu Ibrahim, during an armed robbery operation in Kwara State.

Sabi was an employee of the deceased while the other two suspects worked at different farm settlements.

The FIR added that one Jamiu Abdulrauf of Ita Asalapa Isale Banni Aloore, Ilorin reported the case at the Oke-Ero police station.

“That on the same date at about 0000hours, five unknown gunmen invaded into Asalapa farm settlement via Idofin Odo-Ashe and took his brother one Jamiu Ibrahim ‘male’ aged 45 years out of his room into a guinea corn farm behind his house where he was fired with a gun and abandoned to die in the pool of his blood,” the report stated.

“Concerted effort of the Vigilante Group of Nigeria (VGN) Oke-Ero led to the arrest of one Isiaka Sabi, Bature Hassan and Umaru Ardo of different farm settlements in Idofin Odo Ashe, who were fingered in the killing of Jamiu Ibrahim.

“During discreet investigation conducted at SCID Ilorin, it was revealed that Sabi Isiaka, who was a labourer working for the deceased, invited one Hassan Bature and Umaru Ardo of different farm settlements and planned to rob Ibrahim Jamiu on July 26 but executed the plan of attacking Ibrahim Jamiu on 29/6/2022

“During the discreet investigation, Sabi Isiaka confessed to having conspired with one Bature Hassan, Umaru Ardo, Janyo Dogo and Ahiyah (at large) to rob the deceased.”

The police report said that the defendants and the two at large attacked the deceased with guns and cutlasses.

At the hearing of the case on Thursday, Police Prosecutor, Thomas Adebayo, urged the court to remand the suspects in prison for 21 days pending the outcome of their investigation.

“We are still investigating the case. Efforts are still on towards arresting the remaining suspects at large by the police authorities. However, we pray the court to remand the defendants in Oke-Kura Correctional Facility, Ilorin,” the prosecutor said.

“Our prayers are in line with Section 299 of the Administration of Criminal Justice Law of Kwara state 2018. We have nine grounds to support our application, supported also by nine paragraphs affidavit dated July 22, 2022, and deposed to by Inspector Mohammed Kamaldeen of the state CID, Ilorin, Kwara State

“The state Attorney General is fully aware of the case because the duplicate of the case file had been forwarded to the justice ministry via a letter dated July 22nd, 2022. The receipt copy from the letter is evident having formed part of the evidence in this case. We have not in any way infringed on the fundamental human rights of the defendants.”

Counsel to the complainant, Shuaib Oniye, aligned with the prosecution.

In her ruling, Magistrate A Mogaji, said in line with “the Administration of Criminal Justice Law of the state, I hereby order that the suspect be remanded in Oke-Kura Correctional facility.”

She then adjourned the case to September 1, 2022, for mention.