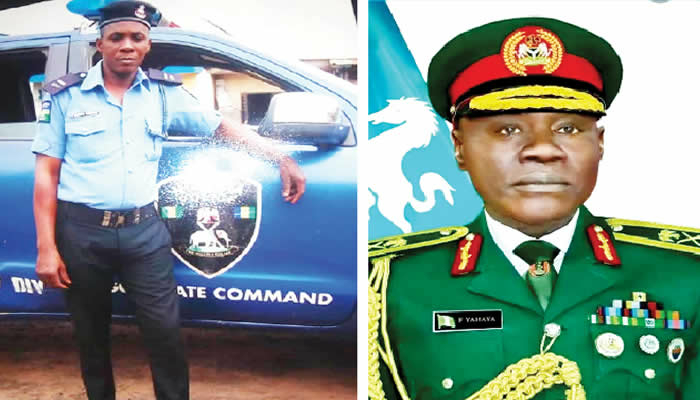 The Lagos State Police Command has lambasted the immediate past General Officer Commanding, 81 Division, Major-General Umar Musa, for saying the soldiers linked to the death of an Inspector, Monday Orukpe, reacted to a gunshot fired by the policeman.

Musa made the statement while handing over to the new GOC, 81 Division, Obinna Ajunwa at the division’s headquarters in the Victoria Island area of Lagos State.

WITHIN NIGERIA had reported that Inspector Orukpe was killed following a clash with men of the Nigerian Army in the Ojo area of Lagos state on Wednesday, August 3.

While noting that investigations were still ongoing, Musa said preliminary findings revealed that the police officer shot at one of the soldiers during the altercation, adding that the bullet missed the soldier’s vital parts.

“The other soldiers reacted to the shot fired by the police officer and this led to their beating the policeman to death. We have paid a condolence visit to the Commissioner of Police to tell him that we will take necessary measures to prevent future occurrences of such nature.

“The injured soldier is in hospital receiving treatment and investigation is ongoing to ascertain the next line of action to be taken,” Musa said according to the News Agency of Nigeria.

Reacting to the statement, the state Police Public Relations Officer, SP Benjamin Hundeyin, in a rebuttal posted on his Twitter page on Wednesday, said no soldier was shot, adding that the soldiers attacked the policemen unprovoked.

He wrote, “Inasmuch as the Lagos State Police Command is in a grieving mood and has decided to toe the line of civility, it is pertinent to stand against misinformation.

“The fact remains that on Wednesday, August 3, 2022, at the Trade Fair area of Lagos State, about 30 privates of the Nigerian Army attacked five policemen for stopping vehicles along their lane to pave way for a heavy-duty truck joining the expressway.

“After the soldiers had brutalised the ASP leading the team, taken out his magazine, and abducted two Inspectors with their rifles, the next Inspector they attempted to attack fired a single shot into the air – an act that made the soldiers retreat.

“At no point was anyone hit. While we mourn our fallen hero and pray for the total recovery of the second abducted Inspector, we urge Nigerians to disregard the claim that a soldier was shot as there is absolutely no truth to it.

“Meanwhile, the Lagos State Police Command looks forward to the fishing out of the soldiers behind the torture and murder of Inspector Monday Orukpe.”

Speaking with PUNCH, the wife of the late Inspector, Favour, on Tuesday, said she and her four children, alongside her husband’s relatives, had yet to receive any official visit from the army and the police authorities.