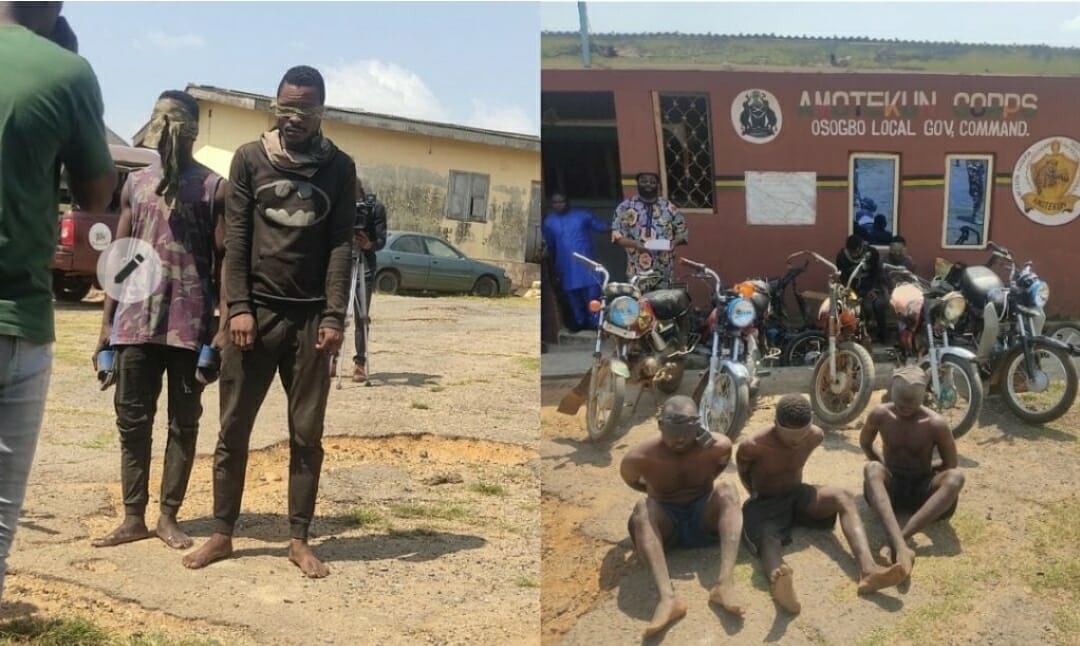 Criminals and those with criminal intent working in Osun State have been cautioned by the Western Security Network Agency, also known as Amotekun, to stop their operations or face the full force of the law.

Amitolu Shittu, the Osun Amotekun Field Commander, gave this warning on Sunday as he paraded five alleged armed motorcycle thieves who had been detained in different regions of the state.

While telling the state’s citizens that the security organization would assure a crime-free Yuletide, Shittu also suggested that criminals leave the state because the agency is prepared to go after their hiding places.

Shittu claimed that the suspects were apprehended while attempting to flee to Oyo State with stolen property while on routine night patrol along the Ife/Osun highway and Ifon/Itesaadu/Ogbomoso road.

According to Shittu, the suspects were apprehended while attempting to flee to Oyo State on stolen motorcycles during routine night patrols at the Ife/Osun expressway and Ifon/Itesaadu/Ogbomoso road. They later confessed during the investigation.

“They were arrested after stealing Bajaj and TVS motorcycles in Ifon-Osun and Ilesa and heading to Ogbomoso and Ibadan to sell them to their customers; they admitted to having committed the crime and explained that they have been in the business for a long time.

“They further confessed that it was their fifth time of stealing motorcycles and transport it to Ogbomoso and Ibadan,” he said.

He disclosed that the security outfit is currently carrying out a discreet investigation to arrest other gang members involved in the act and urged members of the public to support Amotekun Osun by revealing the identity of criminals around them.

While assuring that the suspects will be charged and transferred to the police, who will then charge them in court, Shittu appealed to residents of the state to be security conscious at this time.

He added that during the period of Christmas and New Year, many unthinkable things happen in the societies, which called for vigilance on the part of the populace.