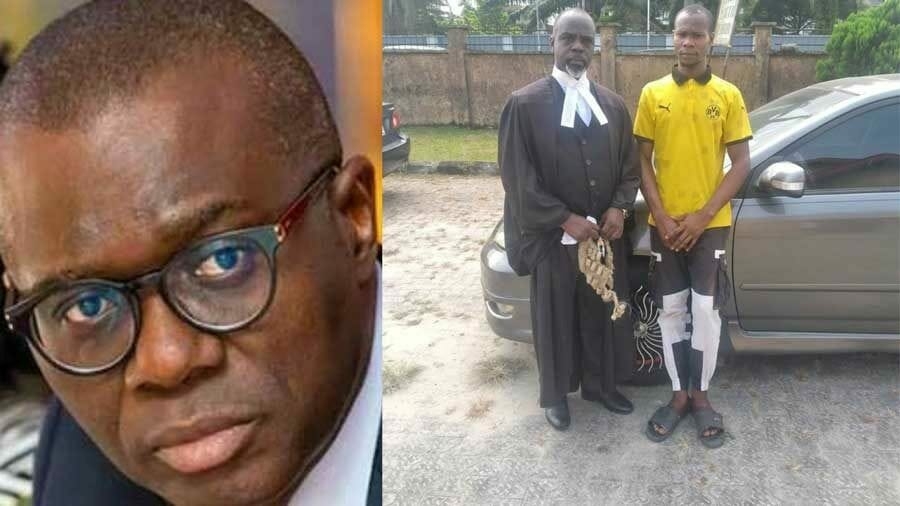 A 27-year-old man identified as Emmanuel Sanwo-Olu, has claimed that the Lagos State Governor, Babajide Sanwo-Olu, is his biological father.

The father of three children said his mother, Madam Grace Moses, had just told him that Sanwo-Olu was his father.

He made the assertions while speaking with journalists at the premises of the Delta State High Court 2 sitting in Effurun, Uvwie Local Government Area of Delta on Tuesday.

Emmanuel added that his mother hails from Oleri community in the Udu Local Government Area and had only him for Sanwo-Olu before she married another man for whom she had other children.

“I am 100 per cent sure that I am the son of Governor Sanwo-Olu”, the young man insisted, saying, “I just want to see the man, Sir, as my father.”

Emmanuel, who told newsmen that he does “casual jobs” to survive with his wife and three kids, stated that for the past 27 years, he had not seen his father.

Counsel for Emmanuel, John Aikpokpo-Martins, also told journalists that the claimant was his client in a case in which the Lagos State governor is a defendant, which came up for hearing before the court earlier in the day.

In the Suit No: EHC/148/2022 between Emmanuel Moses Sanwo-Olu and Babajide Sanwo-Olu, the claimant averred that he was the conjugal product of a congenial relationship that existed between his mother, Grace Moses, and the defendant in 1994/95.

Also in his writ of summons issued by J. O. Aikpokpo-Martins, Esq., the claimant is praying the court for the following:

“A declaration that the defendant is the biological father of the claimant begotten from Madam Grace Moses of Oleri, Delta State.

“An order directing and compelling the defendant to acknowledge and accord the claimant all the rights of a son in accordance to all the laws applicable whether customarily, statutorily, or constitutionally.

“An order of perpetual injunction restraining the defendant from further denying the parenthood of the claimant.”

The claimant, in the 19-paragraph statement of claim attached to the writ, claimed that Governor Sanwo-Olu was a staff of a private company operating in Warri and its environs in Delta State from 1994 to 1995, and in the course of working and living in Warri that period, he had an amorous relationship with a girl known as Grace Moses from Oleri village near Warri metropolis, Delta State from between 1994 and 1995.

He said, “We are expecting that he (the governor) will do that if indeed, he is sure that he is not the father of the claimant.

“But unfortunately, he invoked his immunity to say he is immune against lawsuits and he is not ready to wave it.

The lawyer, however, pleaded with Governor Sanwo-Olu to validate the paternity of his client saying, “nothing more to it.”

“From now till the next adjourned date, which is January 17, let’s see whether morally his conscience can be appealed to, or bring himself forward for a DNA test with Emmanuel. It does not need to be in the press. It can be done quietly. Nobody wants to actually make noise with him but he has actually extremely proved very difficult to scientific verification with the claimant.

“If it happens that Emmanuel is not his son, he goes home. It’s a very simple thing. But if it’s his own, then the young man will be happy that at least, he knows where he comes from. By then, he now has the power and authority to go into the Sanwo-Olu family as a member of the family.”

Aikpokpo-Martins stated that Emmanuel needs the validation of his father to say “he is my son,” so that the Sanwo-Olu family can accept him, pointing out that the validation is hanging in the air while the court cannot force the governor to go for a DNA test.

The Chief Press Secretary to the Lagos State Governor, Gboyega Akosile, could not be reached as he neither picked the calls put across to his phone nor replied to text message inquiring about the matter as of the time of filing this report.