All you need to know about the trending Nigerian ‘Billionaire Friends’ 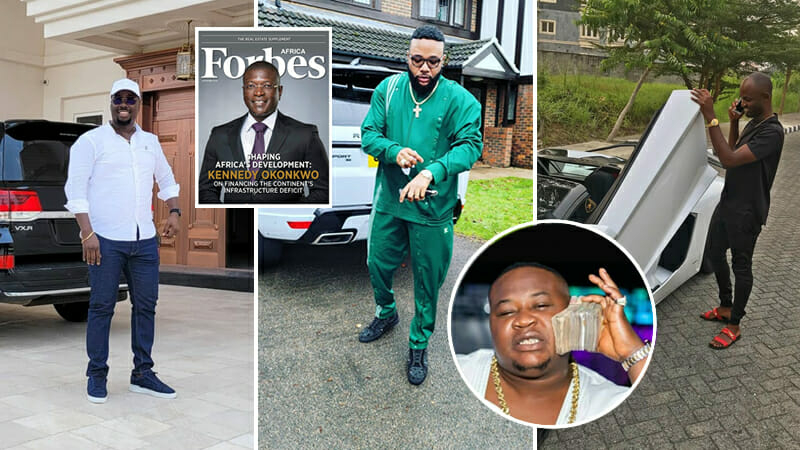 No group of friends in Nigeria right now is painting the social space red with wealth, glam and splendor as the ‘billionaire group’. Few days back, the billionaire friends were spotted having a great time together at the mansion of Jowizaza, the young oil tycoon touted as the youngest billionaire from Anambra State; this was included in an earlier article we had written about the top seven richest Igbo men under 50.

For some time now, the billionaire friends have influenced the social media space in Nigeria and caused mixed reactions with the public display of their wealth as they showcase their properties, cars, including expensive regalia while they grace different social events. One of such event was the burial ceremony of the mother of Obi Cubana – a prominent member of the Billionaire friends, which became the talk of the town across the country. Recall that the wealthy club owner & businessman received 246 cows from his billionaire friends; the gift was nothing compared to the wealth these group of friends have individually and collectively. After the burial, Obi cubana and some of his friends went on a vacation to the Maldives, as he shared photos of their vacation on Instagram.

Fascinated about these billionaire friends whose public display of affluence keep getting the attention of Nigerians? Here are interesting things you need to know about them:

The Billionaire Friends are made up of seven successful businessmen who have been friends for a long time.

The Billionaire friends are all serious entrepreneurs, philanthropists and investors.

A good thing about them is they support themselves in business. Each of them is major investor in companies owned by some of them. E-Money and Jowizaza are key investors in the Cubana group; Obi Cubana is an investor and Partner with Ned Okonkwo’s real estate company Nedcomaks.

With a net worth of over 500 Million dollars, Obi Cubana is the wealthiest of the pack. The billionaire is the chairman of the Cubana group a conglomerate with diversified businesses in entertainment & nightlife, real estate, retail, etc. As at today Obi has been able to spread Cubana reach across various states in the country, including Lagos, Abia and Enugu. Obi is also a great philanthropist though very silent in his dealings. In 2013, Obi Cubana sponsored 53 uneducated Oba boys into the market to learn trading while in 2017, he settled all of them with 3million Naira each and paid for their shops.

The political graduate from University of Nsukka has granted series of interviews to clarify how he made his wealth through hardwork and persistence (link here).

The oldest of the group is Obi Cubana while the youngest is Triple MG boss, Ubi Franklin. It should be noted that they are all less than 50 years of age which is such a laudable achievement, considering that they made their millions in their 30s. This should be an encouragement for aspiring youths and a moral support that they shouldn’t give up on your hustles.

The youngest of the group is the CEO of music label- Made Men Music Group (Triple MG) Ubi Franklin. He is also a talent manager, having worked with top musical artistes such as Selebobo, Iyanya, Tekno, etc. He used to be an assistant to ace comedian Julius Agwu , as well as Ayo Makun before going on to start his own business.

The 35 year old entrepreneur is also the Special Adviser Tourism to the Governor of Cross Rivers State, Sir Ban Ayade; a post he had held since 2020. He has other chains of businesses such as Instant pickup (a laundry service), Instant Apartment (an online real estate company), Instant Ryde (an online taxi service in Calabar & Uyo), amongst many other businesses. The father four (2 boys and 2 girls) who he had with four different women is reportedly unmarried; he is a divorcee after his marriage with actress Lillian Esoro crashed in 2006 but officially divorced in January 2021. Ubi Franklin is currently worth $4 million.

The relatively unknown person amongst them is Hon. Friday Osanebi also referred to as Otunba by his friends. He is a graduate of Material and Metallurgical Engineeering from the University of Enugu. He is called Mr Empowerment by youths in Delta State and has been touted as a very generous man.

It is so worthy to note that the Billionaire Friends all made their wealth in Nigeria, with their establishments within the country. Most of them weren’t born with a silver spoon, so they had to struggle through life, while building their businesses diligently. Another important lesson to note it that they are united and support one another – this was seen in the support they gave Obi Cubana during his mother’s burial. Lastly, as written in the article, they are investors in the businesses of their fellow friends. This should serve as an encouragement for every startup within the country that their business can also grow through persistence and hardwork. More so, with the right association, business can easily scale to great heights. The Billionaire friends are truly an inspiration.