BamBam’s Father, Church members disappointed after her toilet-sex with Teddy A in Big Brother House

Reactions have continued to trail BamBam’s decision to sleep with a fellow Big brother Naija housemates, Teddy A

Teddy A had earlier said he had respect for Bambam and would not have sex with her in the house. However, he was caught in the act on Tuesday.

The viral video since yesterday has been trending with reactions from Nigerians and celebrities.

A church member of the Bambam identified as Stephanie Amaty has just reacted to the video condemning Bambam for disgracing her family.

The church member disclosed that Bambam’s father who is a church elder is disappointed in her.

She also disclosed that Bambam is a choir member in the church parish.

On her Twitter page, she wrote, “I’m personally disappointed in Bamike ‘bambam’ she’s a choir member in my parish!! #BamTeddy

“Her dad is a church elder, how will her family feel… How they really suffered on her… Reason for naming her #Bamike (God take care of her for me)”

Our good girl got the long demanded sugar at last … All this part of her strategy or … #BBNaija, #BBN, #DoubleWahala, #BBNaija3, #BBNaija2018, #Nigeria, #Lagos, #Entertainment, #BigBrother

Nigerian Twitter users went crazy after Big Brother Naija housemates, Bam Bam and Teddy had sex in the house, and they took to Twitter to talk about it.

One particular tweet that caught attention was by King Agility. It drew attention to the meaning of Bam Bam’s full name, Bamike, in Igbo. 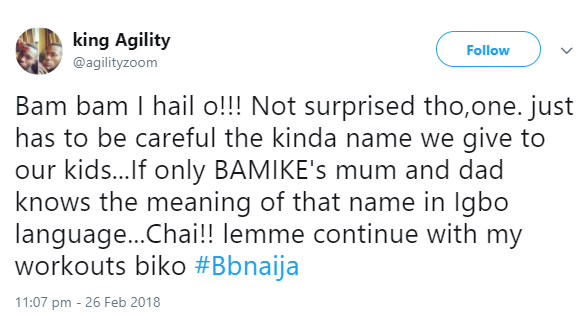