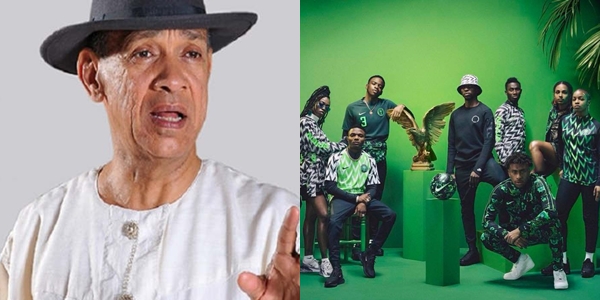 Senator Ben Bruce has come out to slam the decision made by the NFF for allowing the Super Eagles jerseys to be produced by Nike, argues that Aba tailors should have been given the contract.
Well Sen. Ben is known for his logical and economic criticisms when it comes to anything that concerns the growth and development of the country, Nigeria.

We all know the Aba tailors for their industrious nature and their ability to create lovely outfits, well the senator has now come out to say that the super eagle’s jersey contract should have been given to them rather than Nike to save and to infuse at least $100 million into the Nigerian economy and provide jobs for our youths.

“Just imagine if those 3 million Nigerian Super Eagles jerseys were made by a firm in Aba rather than @Nike. Aba tailors have the capacity to produce them. We just lost an opportunity to infuse at least $100 million into the Nigerian economy and provide jobs for our youths.”

@HrhValerie: “Please you are part of the senate House,where were you when they made the decision to give the contract to @Nike”

Replying to @HrhValerie, @NENJnre wrote: “Give contract? ???.. Nike pays you, not the other way around. Calm down and understand processes before you tweet. Nike is our national team jersey sponsor. They paid the NFF 1million dollars after Adidas recused to renew when our deal with them expires. Sport companies pay teams worldwide to make merchandise for them and in turn have full or partial cut of sales to recoup the money.”

@RockofAgis: “But can Aba ever fathom the idea for the design of such jersey?”

@asiwajudin: “Never if you want to know more about about designs jusy check NYSC jungle boots”

@mrmanodili: “Sir I disagree with this one. Let’s leave this particular Jersey issue or it not being made in Aba. What average Nigerian needs from the govt are good roads network, constant electricity, working hospital and a subsidize education.
We can fix every other things by ourselves”

@Princesssamtos: “Whose fault sir? Most of you use foreign designer suits and shoes instead instead of encouraging local designers.”

@genuinechimere: “Nike pays NFF for using their brand. It’s more like a sponsor thing. A lot of countries that have local manufacturers use Nike, Adidas, Puma etc.”