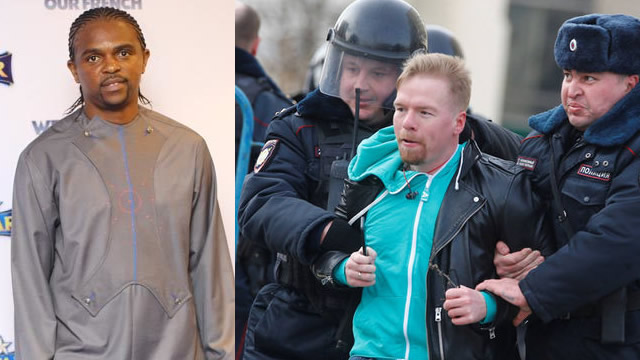 Former Arsenal striker Nwankwo Kanu had 9,300 euros (N3.9m) stolen from his suitcase at Moscow’s Sheremetyevo airport on his way to playing in a friendly match organised by FIFA, TASS reported.

Kanu, 41, who captained the Nigerian national team and played for Arsenal and Inter Milan, was robbed as he transferred to a flight to Kaliningrad at Moscow’s Sheremetyevo airport after arriving from London, the state news agency reported Sunday.

TASS quoted Russian police as saying that they detained two baggage handlers who were unloading luggage from the London flight and stole the money from checked-in luggage.

“The stolen money has been confiscated and will shortly be returned to its owner,” police spokeswoman Irina Volk said. Police confirmed to TASS that the luggage belonged to Kanu.

Moscow and Kaliningrad, a Russian exclave, will both host World Cup matches in a tournament that will see thousands of international fans travelling between the 11 host cities. Starting Monday, fans with tickets can travel to Russia visa-free. The first teams will also arrive in Russia this week.

Kanu played in Kaliningrad in a special “Relive the Legends” friendly match on Sunday as part of a team of FIFA Legends against a team of Russian veterans. Kanu’s team won 6-4.

Sheremetyevo saw a similar crime in March when a baggage handler was arrested and admitted stealing 56,000 euros from a package belonging to a Moscow bank.