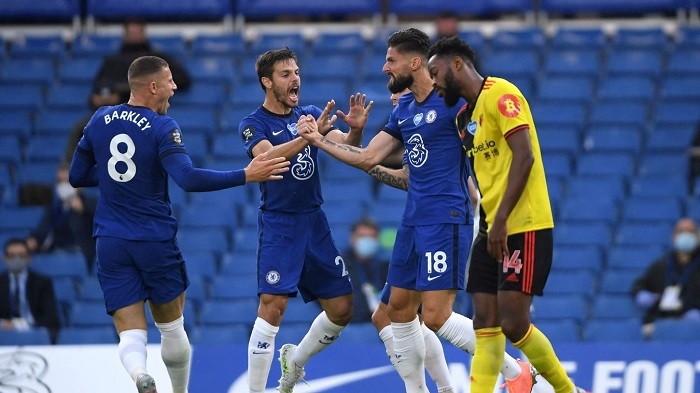 Willian was on target again as Chelsea beat struggling Watford 3-0 at Stamford Bridge to move back into fourth place in the Premier League.

The Blues suffered a midweek defeat at West Ham and slipped out of the Champions League positions when Manchester United hammered Bournemouth on Saturday.

Chelsea responded later in the day, Olivier Giroud marking his return to the starting line-up with the opener before Willian scored his sixth goal in his last seven games from the penalty spot late in the first half.

Ross Barkley added a third in stoppage time as Frank Lampard’s side moved two points clear of United, and just one behind third-place Leicester City, a year to the day since the former England international was appointed.

Watford are just one point and a place above the relegation zone with five matches to play.

Willian fired straight at Ben Foster with Chelsea’s first sight of goal and the Watford goalkeeper kept out a Giroud effort before the France striker opened the scoring after 28 minutes.

The impressive Barkley was the architect, his clever reverse pass giving the former Arsenal frontman the chance to drill into the far corner with his left foot from 10 yards out.

The busy Foster again denied Giroud after the break, while he also tipped a measured Willian shot around the post as Lampard’s men remained on the front foot.

Kepa Arrizabalaga produced an agile stop to prevent Danny Welbeck from halving the deficit as Watford showed more of a threat, but Barkley rifled home his first league since October 2018 after Pulisic had been denied a penalty as Chelsea cruised to victory.