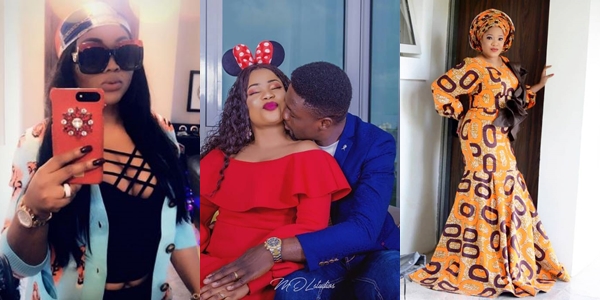 Days after being called out, Mercy Aigbe and Toyin Abraham have unfollowed each other on Instagram, and Mercy has also sent a shoutout to Toyin’s ex husband, Johnson Adeniyi’s fiancée on her birthday

Recall that Toyin put Mercy on blast and accused her of ‘destroying’ her home and also being a hypocrite. This they later debunked and said it was just a stunt.

Even actor, Yomi Fabiyi slammed Toyin Abraham for claiming the blast was a stunt.

In a series of heated posts, he wrote:

Can she just shut up. Hopefully people can now see clearly my previous positions. Mercy did no wrong. Just the usual EVIL, ENVY, HATE laced with LIES and backed by fake accounts and reckless proxy followers who will soon know better. Is it not the same marriage you crashed yourself by setting the poor guy up and eventually packed out despite sincere pleas. Using failed marriage with your deliberate reckless act to win unnecessary sympathy. Why bring the innocent hardworking lady into this. Now that you hurt her brand badly, you are now claiming it is a joke. You can only fool the gullibles mate.

Is it that hard for you to do, LIVE & LET LIVE. Stop hurting people’s brand on social media, must it be you always. NOW UNA DON SEE WHAT AM TALKING ABOUT. Why lies and pull her down when @realmercyaigbe is getting endorsement and should enjoy her shine. Why is @lauraikeji not getting such attack. WE DO NOT NEED THIS IN THE MOVIE INDUSTRY for christ sake. Thank God I know where my own attacks had been coming from after any good effort or positive trending stories. Gosh!

@iyaboojofespris this babe cannot conceal her evil and usual wickedness. Even if they both share same PR and the guy got Mercy an endorsement, pray and work harder. Instead, just yesterday the company expect the brand ambassador to trend for good she brought out a heavy lies and ruined the party for the poor lady. I have said it severally that it is her way to always device one negative thing or the other directly or indirectly to milk her target reputation down. The sad part is she ride on her gullible follower and choose things that will send those ones after her targets. That madness must stop. The industry doesnt need that. How can Mercy at this level ask they pull a stunt as dirty as that terrible allegation and lies. I refuse to be silent over such evil. We dnt want such. The ones done to me is what I am still dragging in Lagos High Court. Ignore those commenting. Most her innocent or ignorant. I cannot help them now. I am not bothered.

Well, it’s now apparent the blast wasn’t a stunt after all.

They have unfollowed each other on Instagram, and Mercy wished her ex-husband’s fiancee, Oluwaseyi Edun a happy birthday today.