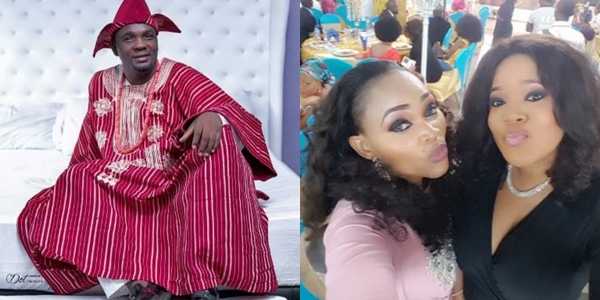 The drama that started between Nollywood actresses Mercy Aigbe and Toyin Abraham over the weekend has escalated into a serious argument tearing top Nollywood stars apart.

Nollywood Actor Yomi Fabiyi who called Toyin Aimakhu an evil woman who enjoys pulling everyone down alleged that the actress is envious of Mercy Aigbe’s success in the wake of her new endorsement deal.

This has caused a bit of war as other stars have called Yomi out for being loquacious and overly outspoken even when unnecessary.

Can she just shut up. Hopefully people can now see clearly my previous positions. Mercy did no wrong. Just the usual EVIL, ENVY, HATE laced with LIES and backed by fake accounts and reckless proxy followers who will soon know better. Is it not the same marriage you crashed yourself by setting the poor guy up and eventually packed out despite sincere pleas. Using failed marriage with your deliberate reckless act to win unnecessary sympathy. Why bring the innocent hardworking lady into this. Now that you hurt her brand badly, you are now claiming it is a joke. You can only fool the gullibles mate.

Is it that hard for you to do, LIVE & LET LIVE. Stop hurting people’s brand on social media, must it be you always. NOW UNA DON SEE WHAT AM TALKING ABOUT. Why lies and pull her down when @realmercyaigbe is getting endorsement and should enjoy her shine. Why is @lauraikeji not getting such attack. WE DO NOT NEED THIS IN THE MOVIE INDUSTRY for christ sake. Thank God I know where my own attacks had been coming from after any good effort or positive trending stories. Gosh!

Others who have commented on the issue either directly or indirectly is actress Kemi Afolabi, Iyabo Ojo, and Omo Brish.

Kemi Afolabi in a hashtag told her friend Mercy Aigbe to bury her haters with success, while Omo Brish tackled Yomi Fabiyi as a loquacious man who talks too much.

While Mercy Aigbe and Toyin have stopped taking on each other on the matter, it seems all is not well with their colleagues.