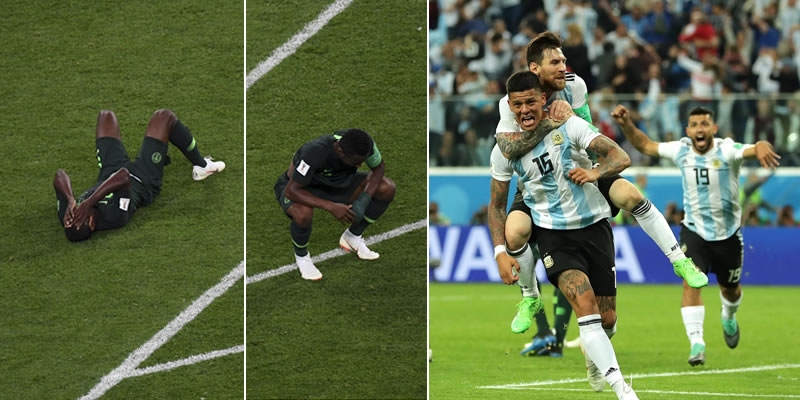 Nigeria’s National team, Super Eagles have been eliminated from the 2018 World Cup, following a 2-1 defeat to Argentina on Tuesday night.

Super Eagles who needed a draw or win to retain in the 2018 World Cup failed to achieve either aims. Gernot Rohr stuck with the same formation and players that beat Iceland 2-0 last Friday, but they struggled to find fluency in the first half.

Victor Moses levelled from the penalty spot, after Javier Mascherano was punished for tugging Leon Balogun.

Odion Ighalo missed two good opportunities to give the Eagles the lead, before Marcos Rojo slammed in a volley late in the game, to give the Albiceleste all three points and a place in the last 16.

Marcos Rojo scored a stunning late goal against Nigeria to rescue Argentina’s World Cup hopes, progressing from Group D alongside Croatia to set up a last-16 match against France.

Lionel Messi scored his first goal of the tournament in the first half but Victor Moses equalised shortly after half-time to put the South Americans on the brink of an exit before Rojo’s late strike.

In the other match, Croatia beat Iceland 2-1 to top the group with nine points.

Watch the Nigeria’s only goal, Penalt scored by Victor Moses below.