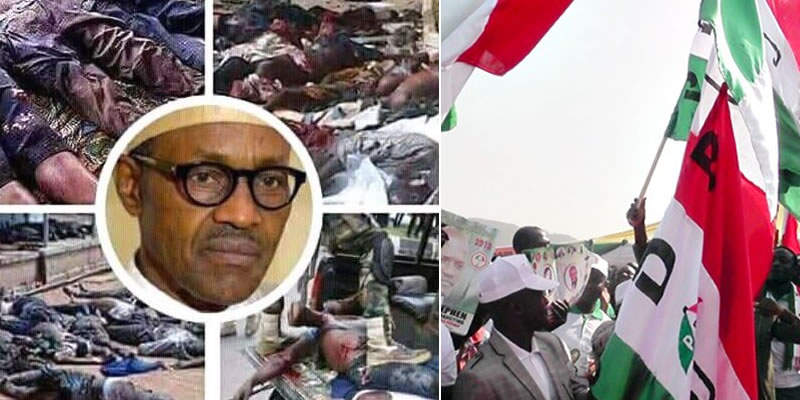 The National Working Committee of the Peoples Democratic Party has declared a seven-day mourning for the victims of the gruesome killings of innocent Nigerians by bandits in Plateau state and other parts of the country.

PDP directs that its flags at all its offices and formation at all levels across the country be flown at half-mast during the period in honour of the victims.

In a statement signed by its National Publicity Secretary, Kola Ologbodiyan, PDP urges the people of Plateau state to exercise their rights as global citizens, work with other public-spirited Nigerians and groups and take President Muhammadu Buhari and his government to the International Criminal Court (ICC) at the Hague for acting helpless in the face of continuous mass killings in our country.

‘The PDP firmly holds that the life of every Nigerian is sacred. All Nigerians must be protected whether they are Birom, Basange, Igbira, Tiv, Idoma, Hausa, Igbo, Fulani, Gbagyi, Yoruba or from any other tribe whatsoever. The fundamental duty of government all over the world is the protection of lives and Nigerians can no longer continue to fold their hands while compatriots are being daily hacked down by marauders’.