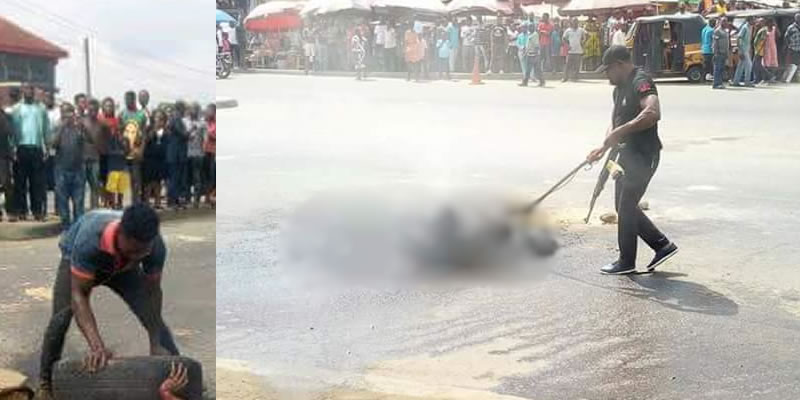 Photos of motorcycle thief burnt to death in Akwa Ibom

A mob on Tuesday, descended on a man, set him ablaze at Urua Ekpa Junction, Uyo, Akwa Ibom State for allegedly stealing a motorcycle.

According to reports, the angry mob pursued the suspect after he made away with the bike, which was packed in front of a fuel station, few kilometers from AKBC Transmitting Station, Ntak Inyang, caught up with him and exacted jungle justice.

An elderly man who claimed ownership of the motorcycle, said he was shocked when he watched the deceased unlocking his vehicle with the aid of a master key, prompting him to inform people round the vicinity, who helped catch the suspect and set him ablaze.

Before men of the State Anti-Robbery Squad, SARS could arrive the scene, the mob had already poured petrol on the suspect burning him beyond recognition. 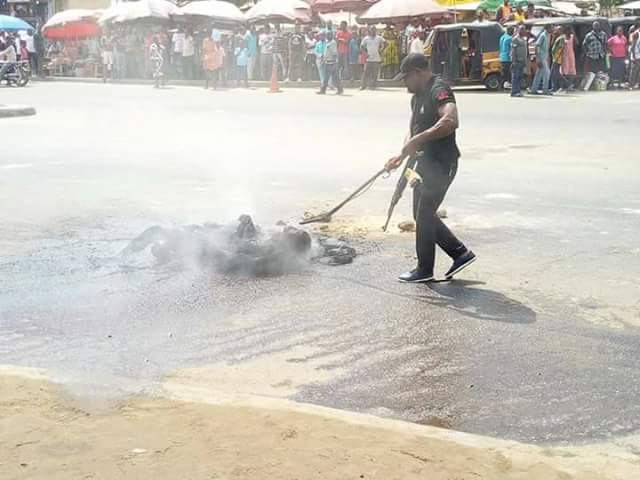 For about an hour, the Urua Ekpa axis of the every busy Calabar Itu Highway was barricaded by curious onlookers who rushed to catch the glimpse of the deceased.

An eyewitnes, Itoro Umoh identified the suspect describing him as “serial robber” whose stock in trade is to steal motorcycle packed at the fuel station by people, who came from Itu and Ibiono Ibom Local Government Areas for business in the Capital City.

Spokesperson for the Akwa Ibom State Police, DSP Odiko MacDon, who confirmed the incident, described the jungle justice as unfortunate and encouraged people to always report criminal matters to the Police instead of taking the law in their hands.