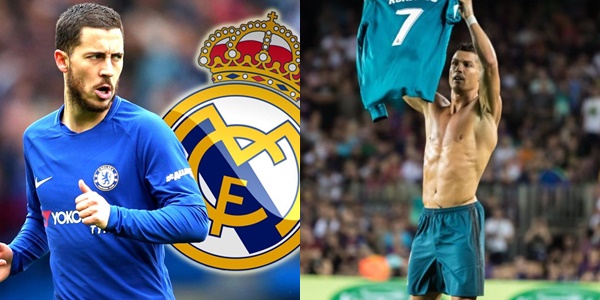 According to multiple online reports, the playmaker has emerged the Los Blancos No.1 target to take over from Portugal’s Cristiano Ronaldo, as the duo of Neymar and Kylian Mbappe are expected to remain with Ligue 1 champions Paris Saint-Germain.

27-year-old Hazard had hinted during the World Cup that he will consider leaving West London this summer and, according to Spanish outlet Don Balon, Los Blancos will now go all out to get their man.

Ronaldo still reign supreme among Los Blancos eggheads despite his recent switch to Juventus but are now moving to bring in the Belgian as an ideal replacement after he refused to pen a new contract at Chelsea.

Chelsea and Madrid are well apart in their valuation of the player, but it is suggested that Hazard may play a part by forcing through a move.

Spain’s news channel, Don Balon, also suggests the Los Blancos are so sure of Hazard’s potential switch and have reserved Ronaldo’s squad number.

Interestingly, Hazard uses the No.10 for Chelsea and country but the squad number is presently occupied by Croatian World Cup superstar, Luka Modric. Therefore, the Belgian captain will make do with Ronaldo’s iconic No.7.