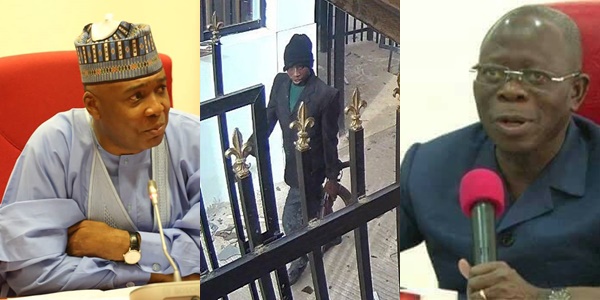 On his defection from the All Progressives Congress to the Peoples Democratic Party, Governor Abdulfatah Ahmed corroborated the views of Senate President, Bukola Saraki that they left party following armed robbery accusations made against them.

It would be recalled that the arrested Offa robbers who killed over 30 people in dare-devil bank robbery operations, claimed to be political thugs of Saraki and Ahmed.

This again has attracted the response of Comrade Oshiomhole who explained that the Offa robbers indicted Saraki and Ahmed, and not necessarily the All Progressives Congress-led central government.

“Who linked senate president Bukola Saraki to armed robbery? Was it the Federal Government or arrested armed robbers? It is armed robbers who were arrested who alleged that the weapons with which they carried out their heinous crimes including the killings of about 35 people of Kwara State somewhere in Offa, that those weapons were procured for them by the senate president. They made these allegations according to the police reports which have been published everywhere,” he said.

He also revealed that one of the robbers was spotted on Saraki’s entourage while he paid a condolence visit to the Olofa of Offa as regards the ill-fated armed robbery attacks which claimed several lives.

Watch the video clip below:

Adorable photos of Bukola Saraki with his beautiful wife and daughters

”I might run against President Buhari in 2019” — Saraki Reveals