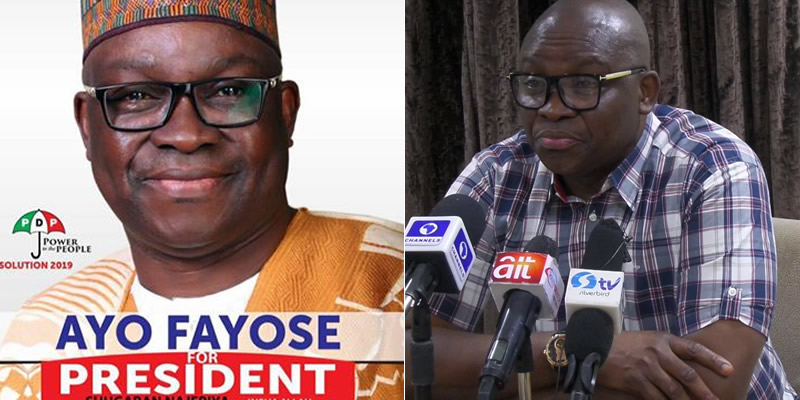 The outgoing governor of Ekiti state was the first to have indicated interest for the office of president come 2019, but has now has dropped his ambition.

According to the News Agency of Nigeria, the governor dropped the hint on Friday when he received the duo of former governor Rabiu Kwankwaso and former minister, Kabir Turaki Taminu, (both presidential aspirants) who came to lobby him and delegates in the state PDP.

Fayose said he had to drop the ambition as mark of sympathy and concern for his deputy, Kolapo Olusola-Eleka who lost in the last gubernatorial election in the state.

“I dropped the presidential ambition because of the stolen mandate freely given to my deputy. As a good leader, I cannot abandon my loyal deputy whose mandate was stolen by the APC and be pursuing another ambition My posters are there in a room. I am committed to the recovery of the mandate for now more than anything else”, he said.

Before now, Fayose had not only opened campaign offices but also came out with retinue of branded vehicles with which to campaign for the presidential slot.