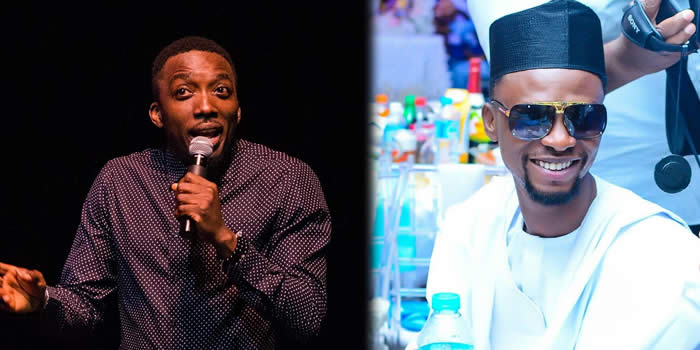 I Go Dye puts off feud with Bovi for later, supports him on his upcoming show

Renowned comedians I Go Dye and Bovi recently had a feud. However, I Go Dye has put off their fight to support the show of his colleague

Earlier, we reported that popular comedians I Go Dye and Bovi were engaged in a brawl. During their social media tussle, the latter threatened to beat up the former.

Their fight was caused by a supportive post Bovi wrote about former Delta state governor Emmanuel Uduaghan who wanted to run for senate in 2019. I Go Dye had replied his colleague with a disagreeing long post and their argument spiraled downwards from there.

However, I Go Dye has decided to put aside these gaping differences in order to support Bovi who is organizing a comedy show themed Man on Fire.

In justifying his action, he said that regardless of their different personalities, entertainment was a strong bond they shared. He was ready to forgo their dissimilarities in order to support his colleague.

From his statement, I Go Dye made it clear that he was also going to be gracing the event with his presence.

“Regardless of what we have as our style and personality, Entertainment brought us this far; I can’t fail to join many in ushering support for BOVI MAN ON FIRE as he steps out on stage once again. See you there. Amb Francis Agoda.”

Thus, all the accusations about Bovi being an ardent supporter of the former governor of Delta state which I Go Dye earlier levied have been dropped, at least till the end of the show. Related interesting story; From N800 per show to N2m per Booking — Life changing story of Bright Okpocha aka Basketmouth
READ ALSO:
Similar Topics
bovicomedianI Go Dye
Share FacebookTwitterWhatsAppReddItPinterestEmailLinkedin
FOLLOW US ONLINE
FOR FASTER UPDATES
Follow @withinnigeria
FOR Trending Videos, Comedy, Viral Photos, Click to join Our INSTAGRAM: @withinnigeria
MOST READ TODAY
Top posts viewed today