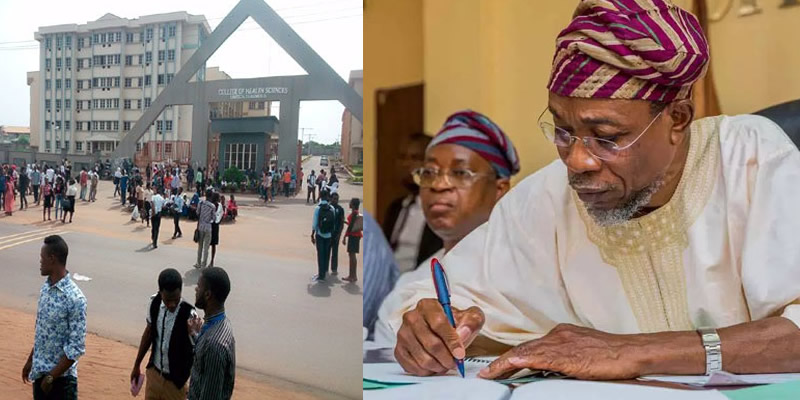 Aregbesola releases N500m to LAUTECH one week to election

It is barely a week to the gubernatorial election in Osun State and Osun State governor,  Rauf Aregbesola has fulfilled his promise to the management of Ladoke Akintola University .

The Public Relations Officer of the LAUTECH, Mr Lekan Fadeyi , announced this in a statement made available to our correspondent in Osogbo on Saturday.

He said the latest release was in fulfillment of the promise made by the governor.

He said the governor made the promise last week when the Chairman, Governing Council of the LAUTECH, Prof Afolabi Oladipo, led the Vice-Chancellor, Prof Adeniyi Gbadegesin, and other university officials to visit Aregbesola in Osogbo.

The university said the money came into its account on Friday just some days after the promise.

Fadeyi stated that the governor told the delegation that his administration was committed to the welfare of staff and students of the institution.

The university’s spokesperson quoted Aregbesola to have said that his government was proud of the various giant strides of the LAUTECH staff and students.

He appealed to the staff and students to continue with the good works aimed at sustaining its present position among tertiary institutions, stressing that all would be well soon.

Responding, the vice-chancellor said he was glad that Osun State had again shown its commitment as a part owner of the university.

He thanked the governor and people of the state while appealing that they should further demonstrate love to the university and its workers, through adequate funding.