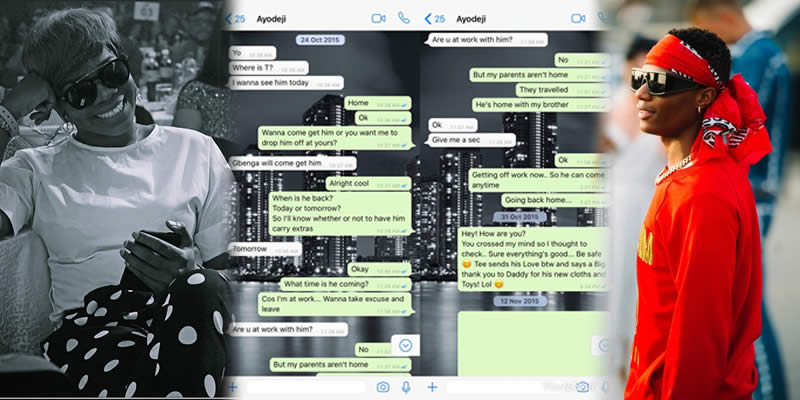 The young lady who is in her 20s took to social media to explain lots of things the singer has done to her and her son.

Oluwanishola in a series of shocking posts corroborated the claims of the singer’s second babymama who had earlier called him out for being a deadbeat father.

Citing examples and sharing screenshots of her chats, Oluwanishola talked about how Wizkid is always begged, forced by family members to pay for his child’s school fees. It’s always war to get the singer to pay his 7-year-old child’s fees.

She also revealed how Wizkid would be checking if his young was gay or not. This he allegedly did by touching some parts of his body and many more ridiculous stuff.

Nishola also revealed how even with being patient with the singer and always trying to get a good life for their son, the singer never appreciated her for once.

All he cared about was being painted as a good person on social media.

‘…You only cared for yourself alone and how the public perceived you. As long as the public saw you as good, then why do you have to perform your fatherly duties? … Even the starboy chain you claimed you got for him, didn’t you collect it back? Social media daddy.

Always quick to go to do that which portrayed you as a good dad to the public instead of showing us actual real love…’, a part of her posts say.

The embittered young lady also complained about how the singer expected their son Tife to speak good English at age 3.

She went on to talk about how Wizkid decided to send the young boy who’s just putting his words together to be taken to his step sister abroad to live it.

This, according to Wizkid, will make him speak his desired ‘Queen’s English’. But the mum did not allow it.

See all she posted below:

She shared Screenshots of Her Whatsapp Chats with Wizkid:

READ: Wizkid’s ‘Starboy’ Jersey with Nike sells out in minutes

Emails she sent to Wizkid’s Manager, Sunday Are:

READ : Meet the Black American couple who just reached their goal of traveling to 100 countries in 5-years.(Photos)