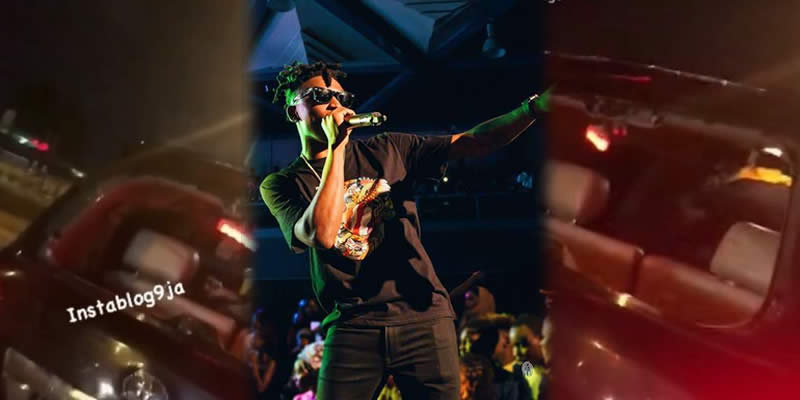 Singer Mayorkun escapes being killed in Lagos, After Perfmance (video)

With fame comes a lot of unplanned things and young singer, Mayorkun, recently experienced the effect of being loved intensely by fans.

In a recently released video clip, Mayorkun, and a group of his guys narrowly escaped being killed by groupies who crowded their vehicles in Lagos.

Friday night was a madness! Big ups to everyone for coming out to watch me perform.. Big ups to @tracenaija for the platform.. We really had fun! Osheeeeeee! #MayorOfLagos

According to the singer, they had been at Yaba College of Technology (Yabatech) to perform and had an amazing time thrilling the students with his impressive number of hit songs that are topping several Nigerian charts at the moment.

However, things turned a bit sour when he made his way home after the performance. Not only was he crowded by groupies but they took it the extra mile when they shattered the car windows of two cars of his.

In one of the clips, Mayorkun can be heard saying he already settled the fans with some money. His generosity was however not enough as both love, admiration and need moved the groupies to do all they could to get his attention.

Mayorkun escapes being killed, as Yabatech students destroy his car, last night, after a show

The singer revealed that his two destroyed cars will be visiting the mechanic soon, which in effect means he will be spending more money. He however still expressed love for his fans.

The campaign turned into a mini concert as many trooped out in several dozens just to catch a glimpse of their favourite OBO. Yet, another interesting story; I dislike Davido, says Fela’s daughter as she reveals she’s 10 times richer