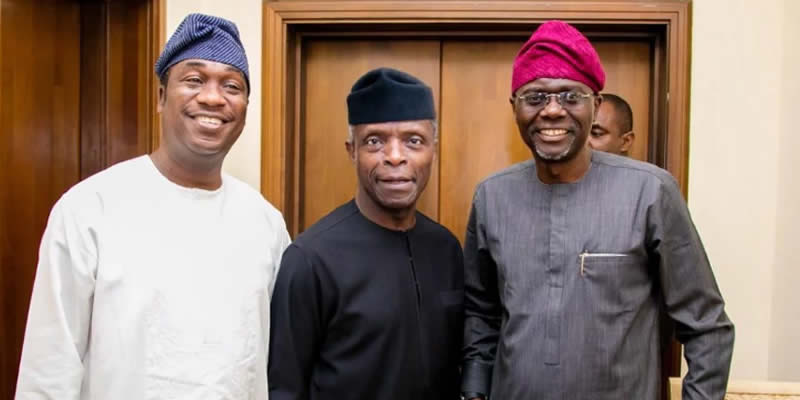 Vice President, Yemi Osinbajo, SAN, is currently in Lagos State. During his visit, Osinbajo will meet the All Progressives Congress (APC) chieftains and stakeholders.

On Saturday, he held a meeting with APC governorship aspirant, Babajide Sanwo-Olu.

In attendance was a former commissioner, Toyin Hamzat, who has since stepped down for Sanwo-Olu.

Sanwo-Olu, who is the reported canidate of APC national leader, Bola Tinubu, will go head to head with Governor Akinwunmi Ambode at the Sunday primary.

The meeting held after the presidential primary election at Eti-Osa LGA.

Meanwhile, members of the Lagos State House of Assembly have adopted Babajide Sanwo-Olu as their candidate.

A statement signed by Chairman of the House Committee on Information, Strategy and Security, Honourable (Princess) Adefunmilayo Tejuoso, said the decision was taken at a Parliamentary meeting of the lawmakers which took place at Lateef Jakande auditorium of the House on Saturday.

The lawmakers stated that they were in agreement with the leadership of the party and the Governor’s Advisory Council (GAC) which had earlier endorsed Sanwo-olu for the governorship ticket. Related topic; Oyetola visits ‘godfather’ of South-West APC after winning Osun Election (Photos)