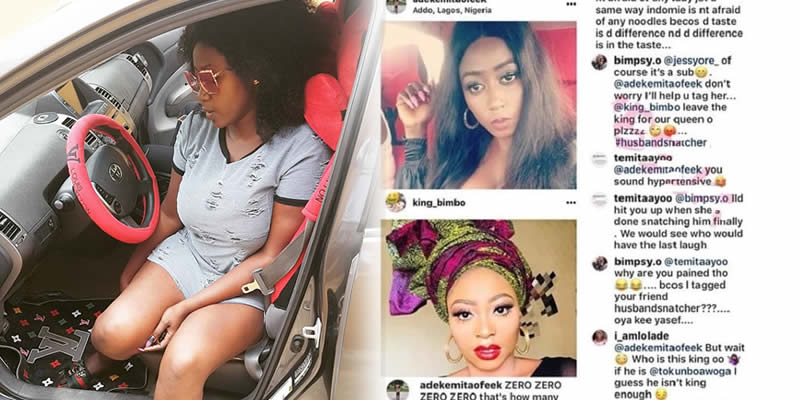 When it comes to Nollywood, the series of drama both on and off screen never seems to end most especially with relationships and the never-ending scandals that seem to trail them.

While some women would rather prefer a much physical confrontation, others, however, go for a more subtle means. Fast rising Nollywood actress, Adekemi Taofeek, has taken to social media to call out her fellow actress, Abimbola Adeleke, for attempting to snatch her boyfriend.

In an Instagram post, the dark-skinned beauty spared no words in stating that no woman was competition enough for her and that she isn’t bothered when her man flirts with her. She went on to state that she’s not afraid of any woman taking her man away.

Although Taofeek didn’t call any names, it appears some of her fans and followers seemed to have inside knowledge on who she was referring to.

A particular follower even went on to tag the actress she was shading, warning her to steer clear of Taofeek’s man. Adekemi Taofeek did little to correct the impression.

Going through the post, the comments have since been deleted and the actress in question is yet to respond to the allegations. You may also like; Ogun Native doctor refuses to use lady for money ritual, his reasons will shock you

Valentine Day : Why married women should put me on salary, actress Inem Peter…

“I’ll let you wifey me”, DJ Cuppy says as she shoots her shot at UK rapper, J Hus