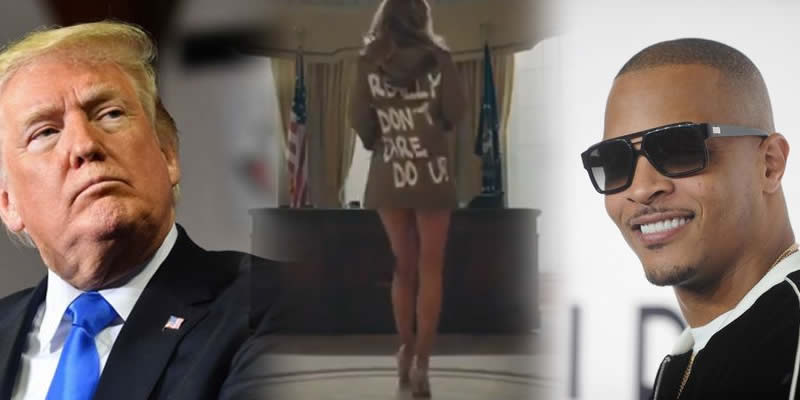 Rapper T.I mocks Trump and his wife with new music video that has a graphic love scene of a naked Melania Trump look-alike (video)

Rapper T.I. has hit at the President of the United State and the First Lady by releasing a music video of a Melania look-alike stripping for him in the Oval Office.

The video shows T.I. in the Oval Office after Trump left the White House. The rapper is seen kicking back in the President’s seat and smoking a cigar. Soon a Melania Trump look-alike walks in wearing nothing but her infamous “I Really Don’t Care” jacket.

Soon, Melania strips naked on the Presidential desk, giving T.I. a full view of her entire naked body. They later leave together and are seen wrecking the White House, spray painting over Mr. Trump’s portrait and more. He also got a lap dance from Melania in the video.

READ: Kylie Jenner sparks marriage rumours as she calls Travis Scott “hubby” thanks him for gifting her roses

T.I. was clearly trying to anger Trump and he captioned the video with “Dear 45, I ain’t Kanye”.

Below is a preview of the video.

You may also like;  President Trump Insults Lebron James Over CNN Interview