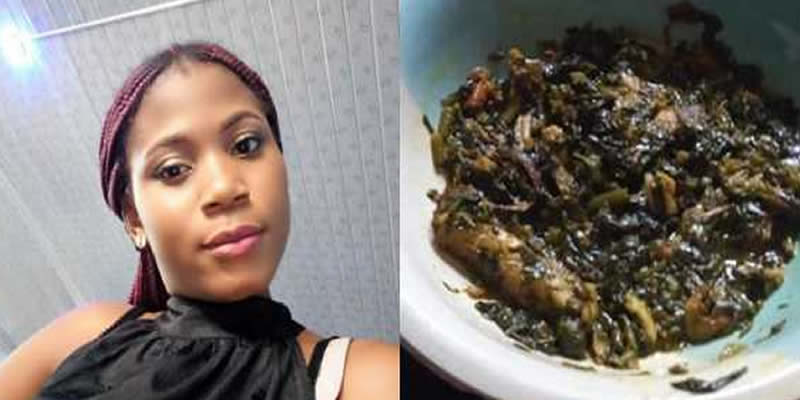 Meeting prospective in-laws for the first time is more often than not, a sensitive thing that most people look forward and try their possible best to create a good impression.

This Nigerian lady however, seemed to have a left quite a lasting impression alright but certainly not a good one. The yet-to-be identified lady might have just ruined chances of ever being in good terms with her future mother-in-law.

According to the post which she shared on a closed Facebook group where she chose to remain anonymous, she recounted how she went to visit her fiance’s mother for the first time and was offered food without meat or fish despite helping the woman prepare the meal.

Sharing the photo on the group, she stated that she left the food untouched since she cannot eat a meal without meat or fish, and went home with the hopes of showing her man the food that was served to her by his mother. Her fiance in turn has not been picking her calls ever since, probably angered by her behaviour.

“I was invited for the first time by my supposed mother in-law . So I decided to go visit her today because I don’t work on Saturdays. When I got there, I was really comfortable because the house is well furnished and everyone in the house was nice to me.

Then few minutes later after they finished cooking, which I also helped out in the cooking. She sent their house help to serve me this. The portion of EBA is not even the problem because I don’t eat much but I have never eaten a meal without meat or fish inside before.

When I saw the food, I felt really bad because I was the one who washed the goat meat she used in preparing it. I felt really bad and embarrassed. I snap it so I would show my fiance but I left the food untouched and went home. I have been trying to reach my guy to explain what happened but he has refused to pick my call. Please house did I do wrong? And please what should I do?”

The post garnered several reactions from people who were of the opinion that she was only being tested by the woman, a test she clearly failed. You may also like; Must Read: 5 Food Combinations That May Affect Your Health