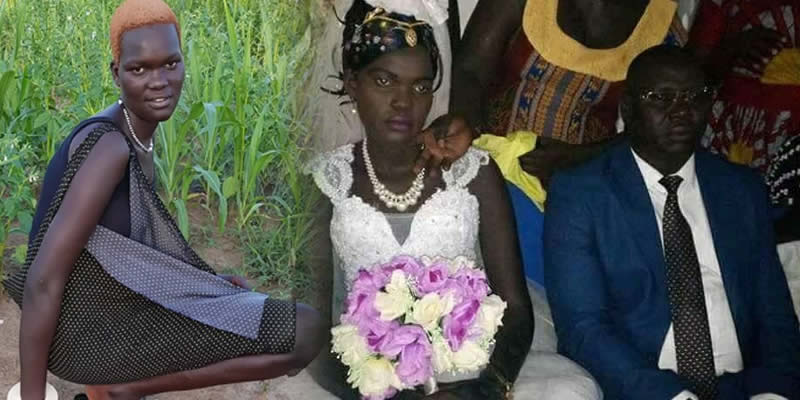 Nyalong’s family had auctioned her for marriage in line with Dinka culture. The competition attracted prominent suitors, the eventual winner led the pack with 520 cows and three V8 cars. Women lawyers have termed the practice dehumanizing and amounts to commoditization of women

Nyalong Ngong Deng, the 17-year-old South Sudanese ‘untouched’ girl from Awerial in former Lake State whose beauty attracted over six suitors, is finally off the shelf.

Nyalong exchanged vows with tycoon Kok Alat in a colorful wedding ceremony at Freedom Hall in Juba on Friday, November 9, bringing to a close the long extraordinary journey in search of a suitable suitor.

She sat pensively next to her new husband, visibly lost in thought throughout the wedding ceremony.One read anguish and family betrayal written all over her face and still it was easy to conclude she was out place.

Prior to the nuptials, the teenager’s family had auctioned her for marriage, a two-week event which attracted prominent figures in an epic competition.

The groom beat at least five other men who had expressed interest to marry Nyalong in line with Dinka culture after each failed to match his 520 heifers, three Toyota V8 cars and KSh 1m (N3.5m) to win the beauty’s heart.

Among the competitors was the former commissioner of Awerial and the current Deputy Governor of Eastern Lakes State among other who is who in the Africa’s youngest independent state.

In Dinka culture, any man willing to marry must convince the girl’s family he has the desired qualities which include ability to take care of their daughter.

It is from here that contestants are carefully ‘auditioned’ before letting them battle it out in a long search for the lucky son-in-law able to meet dowry terms.

Women lawyers from South Sudan have called out the government to investigate the bizarre incident and take action against those involved in the auction exercise.

The lawyers said the practice though forms part of Dinka’s culture, it amounts to commoditization of women. You may also like this Tribal Bigot: Peter Obi finally replies el-Rufai