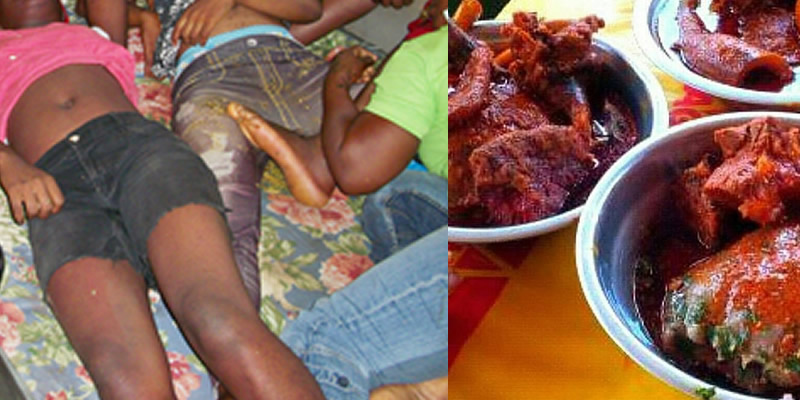 Tragedy hits family of 8 after eating Amala, 4 killed, 4 others battling to survive in Ilorin

Four members of a family in Ilorin were feared dead after the consumption of Amala meal, suspected to be poisonous.

Four members of a family in Ilorin were feared dead after the consumption of an ‘amala’ meal, suspected to be poisonous.

Four others who ate the meal, have also been hospitalised at the University of Ilorin Teaching Hospital.

A source told newsmen that the victims took the meal on Sunday night before three of them were found dead the following morning.

According to him, the fourth casualty, who was the head of the family, died on Wednesday.

“Those feared dead are the family head, his sister and two children, while those recuperating in the hospital are the mother and three other children.

“The corpses of the deceased had been buried in accordance with Islamic rite. They were eight that took the meal.

“Though we are not sure yet of the cause of death. Officials from the state Ministry of Health were in the community to take samples of the meal for test but nothing has been said about the findings,’’ the source said.

The family is an extension of the District Head of Adewole, popularly known as Alangua Adewole in Ilorin.

He, however, said that the ministry was yet to identify the cause of the “ugly and unfortunate occurrence.”

Fakayode told newsmen that samples from the meal were taken for laboratory investigation, which would be out within the next 24 hours.

“As it stands, it is difficult to say the cause until the result is out.

“However, we are definite that it is food poison because of the symptoms, but we are not sure of the food item that is culpable,” he said.

When a Journalist sought confirmation from the Police Command in Kwara State, its spokesman, DSP Ajayi Okasanmi, said the command was not aware of the incident.