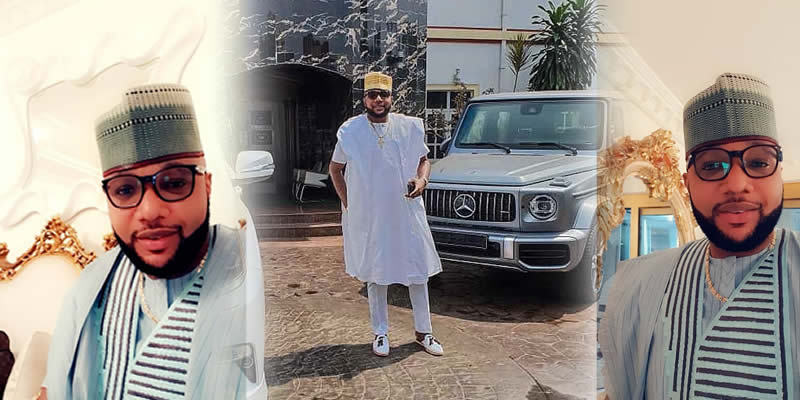 Nigerian socialite and businessman E-money has showed off his recently acquired 2019 Mercedes Benz G-wagon. The young businessman shared photos of himself with the newly acquired vehicle.

E-money was spotted in a flashy white agbada paired with a traditional cap as he posed in front of the 2019 Mercedes Benz G-wagon.

It has been known that the young businessman who is also the owner of, Five Star record label, has a thing for expensive vehicles. He oftens shows off his squad of expensive cars on social media.

You will keep experiencing God's graciousness bcos he has chosen you. Your eyes will keep seeing his wonders bcos heaven have signed it. Remain elevated. Amen. #tgif #itistoolatetofail #wearetooloadedtobeempty #haveablessweekend✌

According to reports, the 2019 Mercedes Benz G-wagon that was recently acquired by E-Money cost over N71 million.

Legit.ng had earlier reported that E-Money who loves to help people, had given out N500,000 to Laura Ikeji after she told him to bless her.

It could be assumed that E-Money supports people with his wealth once in while due to the fact that he did not come from a rich background.

E-Money, whose real name is Emeka Okonkwo, is the younger brother of popular Nigerian celebrity Kingsley Okonkwo, popularly known as K-cee. He is also a respectable person in the oil and gas industry.