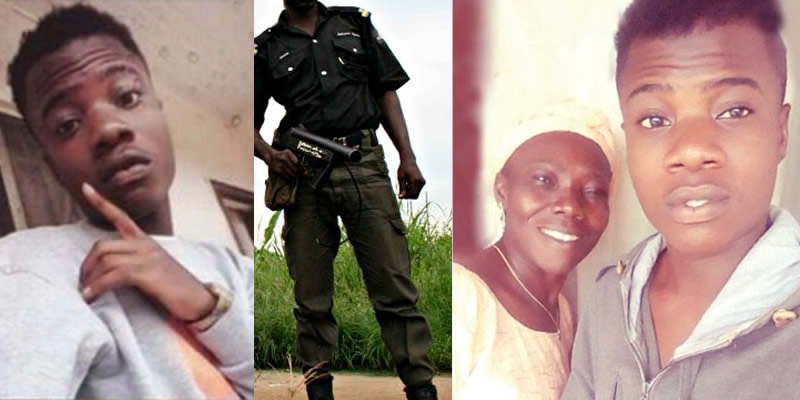 I need justice, my son cannot die like that – Bereaved mother of undergraduate killed by Police in Bayelsa

If anybody had told her that life would be snuffed out of her last child, Tariela Nikade, in such a brutal and gory manner, she would have dismissed it as a doomsday prophecy. But her vivacious young son, her confidant, friend and playmate was gruesomely murdered on November 23. Strangely, the 20-year-old Tariela was killed by a law enforcement agent, who ordinarily was supposed to protect his life. The trigger-happy policeman, in questionable circumstances, released the bullet that put paid to the dreams and aspirations of Tariela.

The hot lead, which drilled a hole on the victim’s chest and came out of his back, shattered the hope of the undergraduate petroleum engineer. Tariela was a bright 300-level student of the Bayelsa State-owned Niger Delta University (NDU). He was a handsome boy with the brains of his late father.

In fact, Tariela was a replica of his late father, Mr. Benson Nikade, who was also an electrical engineer. The resemblance was so much that his family simply referred to him as ‘Brother Bronson’s. He was, indeed, a chip off the old block. After the loss of her husband, Mrs. Nikade took solace in his last son. Each time she looked at his face, her physiognomical countenance beamed with smiles and reassurance that her late husband was still somehow alive. “I was attached to him. He was my last born. We played together and shared jokes.

Photos from the wedding ceremony of former Catholic Reverend Sister…

He simply reminded me of my late husband. Tariela was a very lovely boy. How can I ever cope without him? Among all my children, he was the closest to me. “Tariela was so humble that everybody on our street liked him. If I sent him for an errand and a neighbour saw him and sent him for another errand, he would first run a neighbour’s errand before completing mine”, the weeping mother said. Narrating how his son was killed by the policeman, she said: “We were together in the house discussing. He was forced to be at home because of the ongoing strike by the Academic Staff Union of Universities (ASUU). “Towards evening on the fateful day, he said he would like to go the a barbers’ shop close to our house. His friend owns the shop. He always went there to learn how to cut hair. So, any time he was not home, he must surely be at the barbers’ shop.

He also said he wanted to go there and charge his phone because of lack of electricity. He went there. “After some time, somebody called me and told me that Tariela had been shot. I quickly rushed to the the place but on getting there, I was told that youths in the neighborhood had rushed him to a private hospital. “We started looking for the hospital and found it later. I cried when I saw my son. He could no longer talk. He had lost a lot of blood. He was later taken to another hospital, where he died.

They tried their best to save his life”. The first son of the family, Anderson Nikade gave further insight on how his younger brother was killed. Anderson, who is a journalist with the Bayelsa Stateowned Niger Delta Television, described his late brother as a quiet, respectful and focused young man with many prospects. He said: “We hail from Agbere town in Sagbama LGA of Bayelsa State.The deceased, Tariela Nikade, was our last born. He was 20 years old. He was a quiet, respectful and focused young man with so much prospects, a 300-level student of Petroleum Engineering, Niger Delta University. Due to the ongoing ASUU Strike, he returned home to Tinacious Road, Edepie-Yenagoa, where he resides with our mother.

Our father passed on five years ago. “On that fateful day, Fridayz November 23, this year, he(Tariela Nikade) was at a soloon close to our house in Tinacious Road, Edepie, where he was undergoing training on how to cut hair. At about 7pm when four armed policemen arrived the front of the saloon in an unofficial private car to conduct their usual raid which has become the hallmark of Akenfa Divisional Police Station. “One of the policemen, now identified as Sergeant Timadi Emmanuel, ordered the 20- year-old- Tariela Nikade to raise his hands, which he did.

He was pleading with the officer to show mercy, but the trigger-happy policeman opened fire on him at close range, shooting him in the chest with what is suspected to be an AK 47 riffle. “Sergeant Timadi walks up to the fatally wounded victim and asked him thrice, ‘where the bullet touch you?’ When he saw the boy in a pool of blood, he immediately attempted to sneak away from the scene when one of the witnesses asked him to pick up the injured boy. “The sergeant ordered the man, who witnessed the incident, to shut up, threatening to shoot him if he raised the alarm.

Sergeant Emmanuel thereafter took to his heels, and sped off in their car along with three other officers. They later dropped off one other young man whom they had earlier arrested in a grand plot to conceal their identity, before returning to their police base. “Critical minutes went by as residents of the area mobilised and struggled to secure a tricycle to take the victim to Gloryland Hospital, Yenagoa. The victim was later moved from Gloryland Hospital to Family Care Hospital, where he later died at about 9:30pm, having sustained serious damage to his lungs, ribs and other vital organs”. Anderson said his entire family was devastated, adding that his mother had yet to absorb the shock. “This is another reminder of the urgent need to re-organise the Nigerian police in order to forestall further extra-judicial killing, which is fast becoming common place in Bayelsa State, in the wake of growing security concerns, amidst the recent disbandment of the security outfit , Operation Doo Akpo”, he said.

In fact, the killing caused outrage and protest in Yenagoa as residents and landlords in Akeinfa marched oncthe streets and demanded justice for Tariela. The protesters besieged the Akenfa Police Station, insisting that the policeman must be identified and prosecuted for the crime. Also, scores of students took to the streets to protest the gruesome murder. Some of the residents decried the unprofessional attitude of the conventional police, saying it was a far cry to the professional conduct of the withdrawn state security outfit, Operation Doo-Akpor. A resident, who spoke in confidence, said: “The Nigerian Police in Bayelsa State has lost focus and direction.

Extra-judicial killing of innocent lives is now the order of the day. This is the height of irresponsibility and unprofessionalism”. A social commentator, John Idumange, called for thorough investigations into the circumstances that led to the killing. “The matter should be thoroughly investigated. We cannot keep quiet. For now, sorry is not enough. Kokorifa was killed and his killers have been served justice. This matter should be pursued to to its logical conclusion”, he said. The body language of the state Commissioner of Police, Joseph Mukan, however, immediately gave an indication that the killer cop would not escape justice. In a statement signed by the Police Public Relations Officer (PPRO), Asinim Butswat, Mukan, identified the shooter as Sergeant Timadi Emmanuel. He said the policeman was immediately arrested, disarmed and was undergoing orderly room trial. He also commiserated with the family of the deceased for their loss. Following the outcome of the in-house trial, the policeman was dismissed from the force and detained for prosecution.