According to Twitter user, @bzee01, the young lady identified as Tobi Jacobs went missing immediately the video went viral. The Twitter user claimed attempts to reach her has proved futile as her phone remains switched off.

Tobi Jacobs is missing at home since d video in bed with peruzzi was posted, family/friends are scared n have bin searching for her, her phone is switchd off. She is just 18yrs could be suicidal atm

watch the viral video below.

Davido reacts as video of Peruzzi in bed with Tobi JacobsDavido has reacted to DMW singer, Peruzzi whose video went viral online early this morning.

Davido who fell victim to a similar incident back in February 2012 shared a video this afternoon saying he warned Peruzzi never to allow girls sleep over.

In his words, ‘welcome to the club bro. I told you, never let these girls sleep over’.

Social media users have accused Tobi Jacobs of rape after she leaked a video where she was kissing Peruzzi while he slept.

After the video went viral, Tobi Jacobs, a Unilag student, was accused of kissing Peruzzi without his consent, because an unconscious person cannot give consent, and social media users are calling for her to be given the full treatment given to rapists. 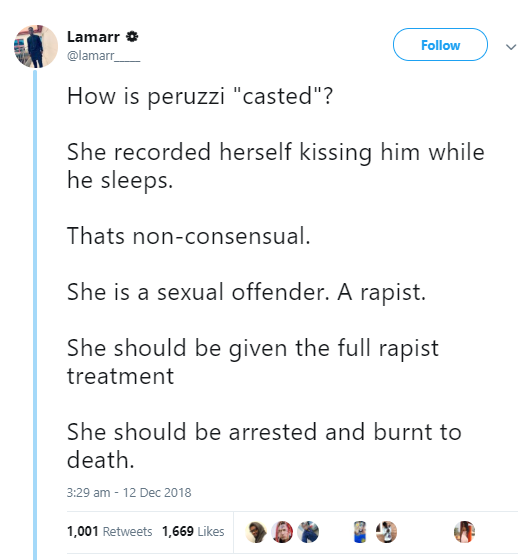 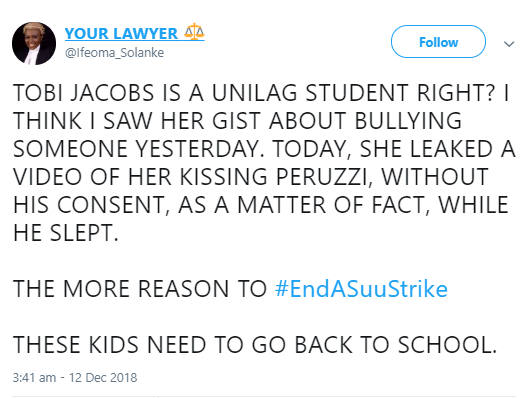