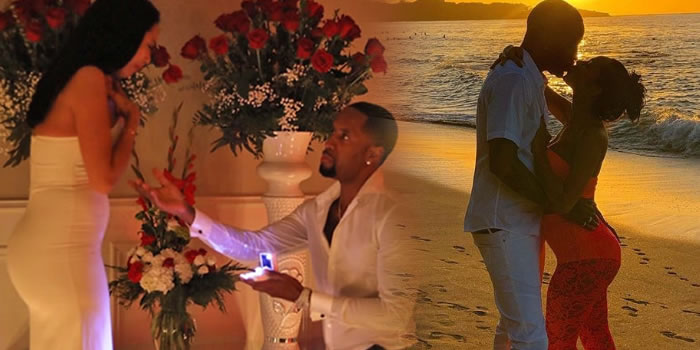 Only weeks after rumours began going round that Safaree and Erica Mena are dating, the couple are now engaged.

Safaree, who is Nicki Minaj’s ex, surprised his new girlfriend Erica Mena by going down on one knee to propose to her with a beautiful engagement ring.

The proposal took place at Erica’s house in Atlanta on Christmas eve. They were surrounded by family and friends when the surprise proposal happened.

READ: Not only is he a convicted rapist, Nicki Minaj&#8217;s new man also served time for killing a man

Safaree reportedly ordered 20,000 rose petals surrounded by 200 candles before popping the question. 112 was also in the house singing ‘Cupid’ and ‘Crazy Over You’ in front of a live band in Erica’s living room as Safaree proposed.

The moment Erica said yes, fireworks began going off outside the house.

READ: 5 Things to have in mind when planning the perfect proposal

The ‘Love & Hip Hop’ stars reportedly started dating earlier this year but kept it under wraps.

Congrats to #Safaree and #EricaMena!! They are officially engaged ❤️💍 (📹: @showtime_e21)

🎇 Some people like to say I’m Extra, I like to say I’m Just me and I’m different. I thought of everything I could possibly due to make this a unforgettable moment and it was all executed perfectly! Merry Christmas 🎄 Thank you @traxnyc @daronfrom112 @exit21_music @jusmoney86 @themadviolinist @therealkdmcnair 📽 @directedbybank @samkingdom

You may also like to read; Davido show off newly acquired Rolls Royce as he unveil plans to relocate to Banana Island

Roman Goddess shows off new house she is building

Venita Blasts Trolls Who Attacked Her Over Her Raunchy Photo