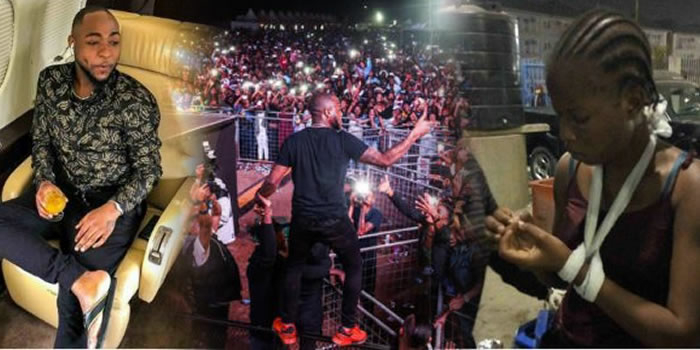 A lady is claiming she was robbed at Davido’s concert that held over night at the Eko Atlantic in Lagos, while the singer looked on.

The lady identified as Karima took to her twitter page to express her disappointment in Davido, also wrote that she had to borrow money from friends to show up at the concert.

I was robbed and assaulted at @iam_Davido #InfinixDavidoLiveInConcert . And Davido looked straight at me and continued the show.

I lost my phone,my ATM card and all my money all because you couldn’t pause the show and see that your fans were dying. A grown man groped me, inserted his fingers in my vagina and continuously beat me up. I fell down on broken glass and you just continued

I was literally stranded at eko Atlantic all the way from ikeja. I told my mum that only rapture was going to stop me from seeing davido and I wish rapture actually happened before this concert.

Before this incident I was like your biggest fan.I didn’t have money but I entered a lot of fake giveaways and called my friends to send me money to come and see you at your concert.

Now I’m in more debt. All my properties are gone and I have a broken arm and a black eye as souvenirs from your concert. The crazy thing was you looked directly at me and continued performing.

You may also like to read; Davido show off newly acquired Rolls Royce as he unveil plans to relocate to Banana Island