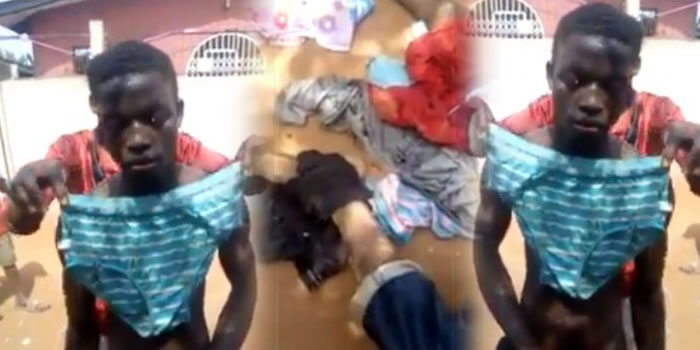 A young man was apprehended by residents after stealing female panties and other clothing items at Benin city in Edo state.

According to reports, the man popularly known as Aboki, stole the items at Lagos street in Ring road area, Benin city and was caught at Orominyan area by the residents.

When asked how much he sells the panties, the young man refused to talk. Though many suspect he plans to sell them to ritualist.

Female leggings, boxers, underwear and other clothing items were also found in his possession.

This is coming days after the Oba of Benin, Oba Ewuare II, warned Nigerian youths, especially yahoo boys stealing pants for money rituals to desist from the act or face the consequences.

Oba Ewuare gave the warning during a thanksgiving service at the Holy Aruosa Cathedral in Benin to round off the 2018 annual Igue Festival Celebrations.

He said youths who cling to the illusion that they could become wealthy by killing people or stealing female underwear for ritual purposes, would no doubt face the consequence.

He added that the behaviour was abominable and alien to Benin customs and tradition.

Two days back, a man was also caught in Ondo state with female pants, bra and soaked sanitary pad.