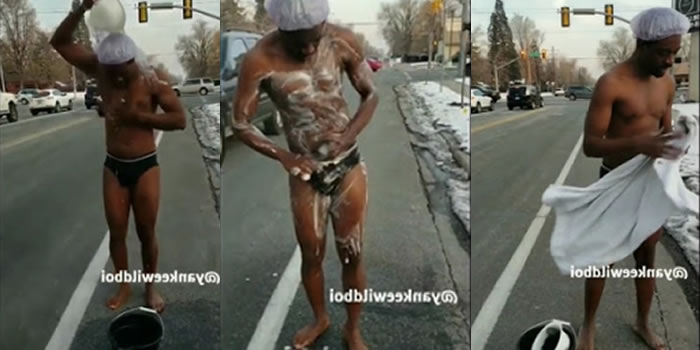 Yankeewildboi is a Nigerian currently living & dancing in Utah, U.S.A. He calls himself #thatrobeguy ‘That Robe Guy’.

Yankeewildboi is a fast rising Instagram comedian. He may not see himself as a comedian but people see him as one due to the kind of things he posts on his instagram page.

Here is the moment Yankeewildboi stormed the streets of USA to take his birthday bathe.

Then his white girlfriend tried to stop him from bathing on the road but he was adamant.

He told her that the witches and wizards from his village want to attack him so he had to bath publicly on the road as “Kolomental” by Faze played in the background.

Yankeewildboi went viral after he shared a video of him shaking his ass, saying that ladies want his ass. Many found the video very funny while few condemned him that Yankeewildboi display shows he might be gay.