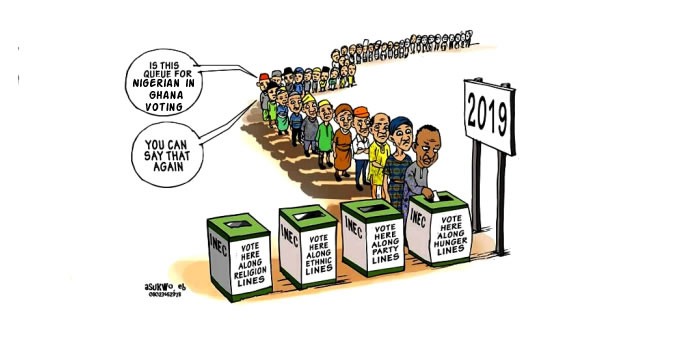 No fewer than six million Nigerians living in Ghana were expected to return home to participate in the next month general elections.

An executive member of Nigerians In Diaspora (NIDO) and the leader of Eastern Brothers Community in Ghana, Elder Tony Ulasi, disclosed this at Obiuno Umudim Nnewi, Anambra State at the burial of his mother, late Ezinne Nnunwa Mary Ulasi.

He said the body insisted Nigerians in the country should be ready with their Permanent Voters Cards (PVCs) to participate in the poll to ensure candidates of their choice were elected.

Ulasi said a giant bell was donated by the family to his mother church for evangelism to immortalize the deceased, her second son, Elder Paul Dike and to reflect the character of their late mother.

He also disclosed that a medical foundation would be set up and named after his late mother for the less privileged women in the community.

“I learnt a lot from my mother. She was a cheerful giver and all of us are givers. Mama was ready to give you the last thing she had and we learnt patience and humility from her,” he said.

In his homily, Rev Fr. Solomon Ugochukwu described late Mary Ulasi as a virtuous woman and dedicated Christian who died peacefully without stressing her children.

He also described man as nothing irrespective of rank and positions in life, saying “Rest in Peace” is the certificate every mortal would acquire at the appropriate time.

The burial was attended by captains of industries, political heavyweights, religious leaders, community leaders and a host of other distinguished personalities.