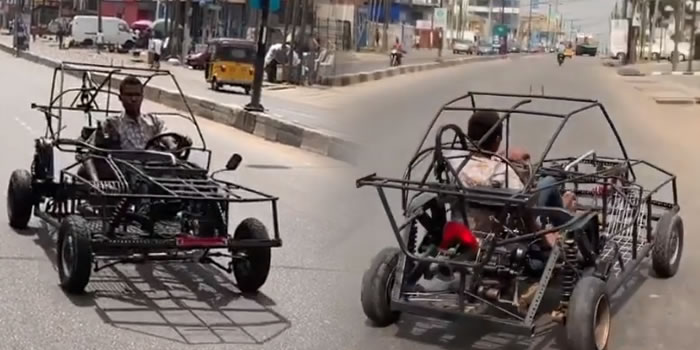 A man was seen driving a self-made car on the streets of Lagos, causing other road users to stop and stare at his unique car.

According to media entrepreneur, Ayo Animashaun, he was so impressed that he stopped the young man to ask if he made the car himself and the man replied in the affirmative.

He also revealed that he has created a drone that flies and a helicopter.

I met this young man last Sunday afternoon while I was driving to the office and we became friends. He was in my office yesterday and we had a long chat. He built his car, has a drone that flies, built a helicopter but doesn’t even have a phone.

This young man put everything he has and get in his passion. He can’t even boast of a “palasa” phone. No battery to start his car, he pushes. He needs our support You need to hear his full story. Stay tuned.

Watch the video of the man driving his car below.