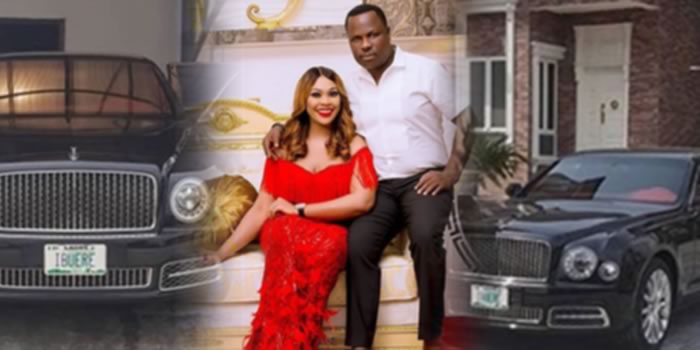 It would be recalled that we earlier shared a staggering accusation levied by popular Lagos hotelier Ehi Ogbebor. The beautiful lady who is known to be married to Nigerian wealthy man Kenneth Bramor accused her husband of being a ritualist.

This allegation was very groundbreaking but it later died down with time. Months after surviving the brunt of such accusation levied against him by one of his own wives, Kenneth Bramor has yet again displayed the level of his wealth.

This he did by buying the newest car model of Bentley. Kenneth did not just settle for less. He went all the way to buy a 2019 version of Bentley Super Luxury Mulsanne Extended Wheel Base with custom plate number named after his family name ‘Ibuere’.

From all indications, this car is worth over N111m. That’s quite a staggering amount, right? Well, someone quite as wealthy as Kenneth can afford the car.

The wealthy man who is a philanthropist and an oil magnate is often referred to as the Umbrella of the Niger Delta as well as the Asiwaju of the people. By buying this car, he has broken a record as he is the first to make a purchase of this model.

To celebrate his new ride, Kenneth took to his page to share an image. He also blessed the photo of the car with a caption.

He said: “The Vehicles that bring the cash behind and the one the cash is used for #2019 Bentley Super Luxury Mulsanne.”

This very suggestive caption and post has caused many to congratulate the rich man upon his new purchase. See some of the reactions below:

twinnetp: “Congratulations boss @kennethbramor more blessings.. As you have chosen to touch lives postively, your household will never.”

highzictemitope: “Congratulations to you Sir, more to come in Jesus name . Daddy pls say a prayer for me too Oo, I want to bless people just like you do. God hear my cry Biko ooo.”

Ehi Ogbebor, the wife who levied a grave accusation against the rich man, have been known to also display luxurious cars that show just how rich her husband is. Recently, it was reported that she rocked a Rolls Royce to a wedding.

‘My siblings are richer than me’, Davido reveals