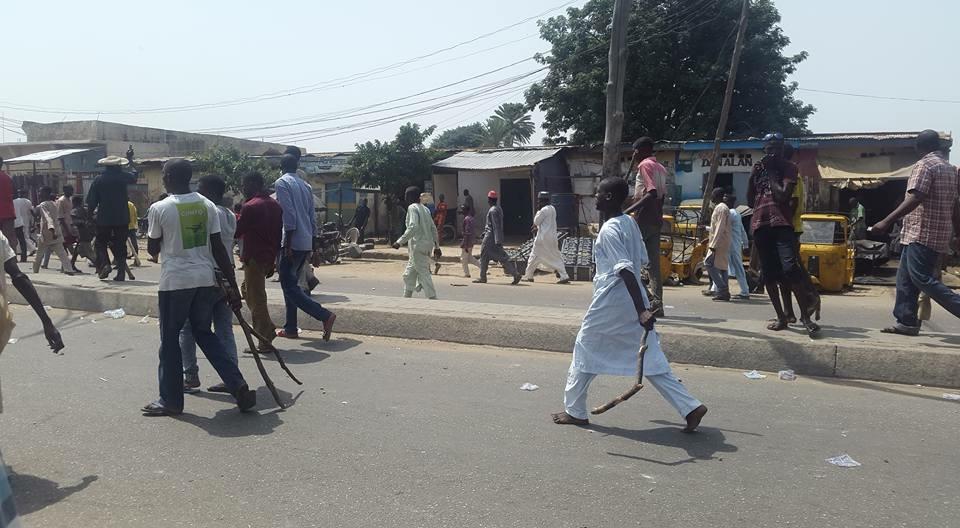 The correspondent of the News Agency of Nigeria (NAN), who visited the scene on Sunday, reports that eight shops were burnt down in the community.

The CP, who confirmed this through the command’s spokesperson, Mary Malum, said investigation into the attack which occurred on Saturday evening was still ongoing.

A resident of the community, Malam Nuhu Usman told NAN that the attackers started stoning them on their way back from airport before setting eight shops on fire.

According to him, many people sustained various degrees of injury, while one of them is currently hospitalised.

Meanwhile, Alhaji Ibrahim Biu, Managing Director of the radio station, has alleged that the attack was caused by some thugs attached to Gov. Ibrahim Dankwambo.

“Yesterday evening, thugs following the governor’s convoy from the airport attacked our office with weapons.

“They were throwing stones and making attempts to gain entrance into the compound.

“`So I quickly called the commissioner of police and the director of State Security Service who responded swiftly.

“ In the attack, one of our security men was wounded. It was very scary but we thank the security for their swift response,” he said.

However, Director of Media of Peoples Democratic Party (PDP) Campaign Council in the state, Mr Dahiru Kera said the thugs that attacked the community and the radio station were not from PDP.

Kera said the thugs had initially attacked the governor’s convoy on his way from the airport, adding that two cars in the entourage were burnt.

He disclosed that the development was why the governor cancelled a rally organised to welcome him back to the state.