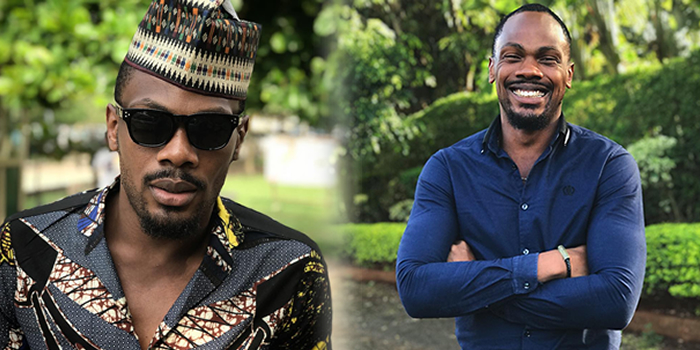 Why I quit my job in oil and gas sector to pursue acting – Nollywood actor, Etim Effiong

Etim Effiong is known for his playboy roles in movies, many of which he acts romantic scenes with ladies. In a recent interview with Saturday Beats, Effiong noted that his wife usually asked him if he felt anything real for the ladies he kissed on set.

“We talk about it all the time. Sometimes I play roles that require that I kiss very well that she will be like ‘wait, that was so real…did you really feel nothing?’ My wife understands my craft and is kind enough to let me practise my craft unhindered as long as I respect the boundaries of the craft as well as the sanctity of my marriage.

“I think I make it a point of duty to inform my fans that I am happily married. I get people sending me direct messages to profess their love and admiration for me but these are harmless jokes. Some mischief makers have sent me unsolicited nude photos before but I deleted them immediately. My job as an actor requires that I embody the role that I play; this has nothing to do with who I am as a person. I become the character I am playing and when it is over, I go back to being me,” he said.

Effiong took a bold step by leaving his 9 to 5 job in the oil and gas sector to pursue his passion for acting; however, he said it was not an easy decision to make.

“My biggest worry moving from a 9 to 5 job in the oil and gas sector to the entertainment industry was losing the safety blanket of getting salary at the end of the month. I have been involved with the arts industry since childhood. I was comfortable with expressing my talent on stage, whether it was in church, school or on the job as an engineer.

“However, making acting and filmmaking a career choice was hard. I had to overcome many contrary voices coming from within and outside. I fasted and prayed and God sent me help in the form of inner strength and friends who encouraged me. On the day I quit my job, I told no one because I was afraid I was going to be talked out of it. So I quit my job first; then announced to my family and friends what I had done and the rest is history,” he said.

According to him, his parents found his decision very hard to believe.

“After I announced that I had quit my job, of course, the natural reaction was disbelief, and then they thought I had got another job in a bigger oil and gas firm. You can imagine their fear and for some, disappointment, when I told them that I was going into full-time entertainment.

“It was only when I started winning awards and making some money that they let it go. They have come to respect my career choice, although some people who knew me as an engineer still give me the ‘so you’re still doing this thing’ look.

“In fact, I was in my second year in school, studying engineering when I informed my parents that I wanted to leave engineering and start over in theatre arts. They were quite worried about my mental state and swiftly called for a family meeting. I was half-threatened and encouraged to get the engineering degree and then go on to do whatever I wanted,” he added.

Asked if he felt he was limited to acting ‘bad boy’ roles in movies, he noted that he felt so sometimes. He, however, added that since he produced his movies, he could also cast himself in other roles to break the jinx.

He said, “I draw inspiration for my craft from past memories and from engaging with the world around me. I am constantly fascinated by the good, the bad and the ugly as well as their transient realities. What we term as ‘bad boy’ characters or roles of villains are more intriguing and sometimes more captivating than roles of heroes.

“My role as Folarin was one of my first roles in the industry and I guess I played it so well. It was so believable that it became a reference point for many other actors, writers and producers.

“I think I am honoured that the audience responded to my role in ‘Gidi Up’ the way they did. Kudos must also be given to the creators of the show. I have embraced the challenges that come with playing a role so well. Now the flip side of this is that as a storyteller, I get opportunities to tell my own stories, so I can create characters that show me in a different light when I feel typecast as the villain.”

Actor Emma Emordi speaks up, after ex-wife accused him of stealing and infecting her…

BBNaija: ‘I know what happened under the duvet with Gedoni’ – Khafi says