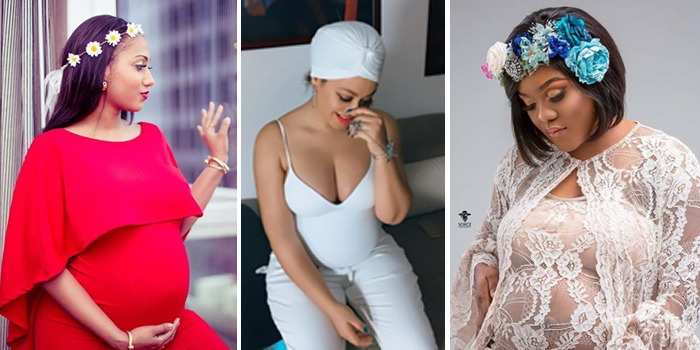 The act of flaunting baby bump on social media has become something celebrities can’t avoid these days because of questions which normally arise after they give birth.

The questions could be whether the baby was welcomed via a surrogate or whether it was true IVF.

In order to prove critics wrong, most of these celebrities post pictures from photo shoots they had with their baby bump on social media. See pictures below.

She’s a cook show host who gave birth last month in Canada. After years of waiting for a child, Nana decided to post baby bump pictures to ward off talks from people who might think she welcomed the child via surrogacy.

Becca is a singer married to a Nigerian man Tobi Sanni. Few months into their marriage, the couple welcomed a baby. Critics were still in doubt that she was really pregnant untill she shared baby bump pictures and even recently shared a video showing her dancing with her bare baby bump.

An actress who gave birth to twin baby girls in 2015. She welcomed another girl in 2017 and the last one in January 2018. She has done well to keep her family affair from public eye. The picture below was shared days ago as throwback to when she was pregnant.

The actress welcomed baby girl, Ryn Roberts on 29th October 2017. She had the baby for British photographer, Jamie Roberts.

She welcomed her first child in 2016. She was once in the relationship with Kennedy Ohene Agyapong, a member of parliament for Assin Central.

She welcomed her first child, Lorde Pitcher on 26th October 2016 after suffering one stillbirth and three miscarriages.

Describing her daughter as a living testimony of God’s promise, Kafui Danku shared photos of her baby bump in gratitude to God.

She kept her pregnancy from the eye of public, but after she gave birth in 2018, the wife of controversial musician Kwame shared pictures of her baby bump.

Young Lady embarrasses man as he refuses to pay agreed N5,000 after ‘servicing’ him in Anambra

Coronavirus: Nollywood Actress Eniola Badmus called out for not observing…