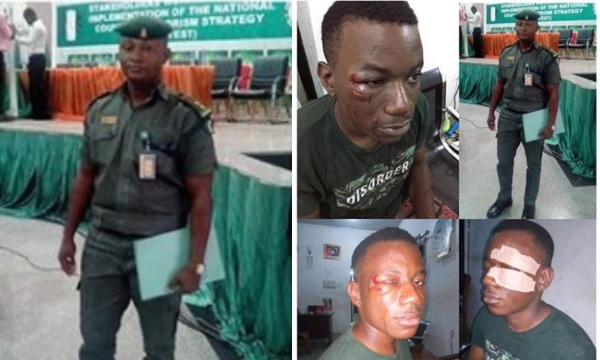 An official of the Nigerian Prisons Service, Idongesit Williams Ntia, has been accused of grave assault in Uyo, Akwa Ibom State. According to one Akaniyene Etim, the victim, identified as Emem Ekanim, had intervened after seeing the accused and two of his colleagues beating a man who rammed his mini bus into their private car along Nnwaniba Road, Uyo.

Ekanim said he stopped to plead on behalf of driver who was, at the time, on the ground, begging to be spared after admitting being at fault, but got more than he bargained for, as Ntia used the butt his gun to hit him about four times.

He also claimed that he was beaten to a pulp and his clothes torn and it took efforts of the crowd that gathered to save him. After allegedly committing the offense, the Officer and his colleagues jumped into his car and zoomed off.

Two eyewitnesses, Akaninyene Bassey and Usen Akpan, collaborated the victim’s story and urged the authorities concerned to ensure the culprit is brought to book.