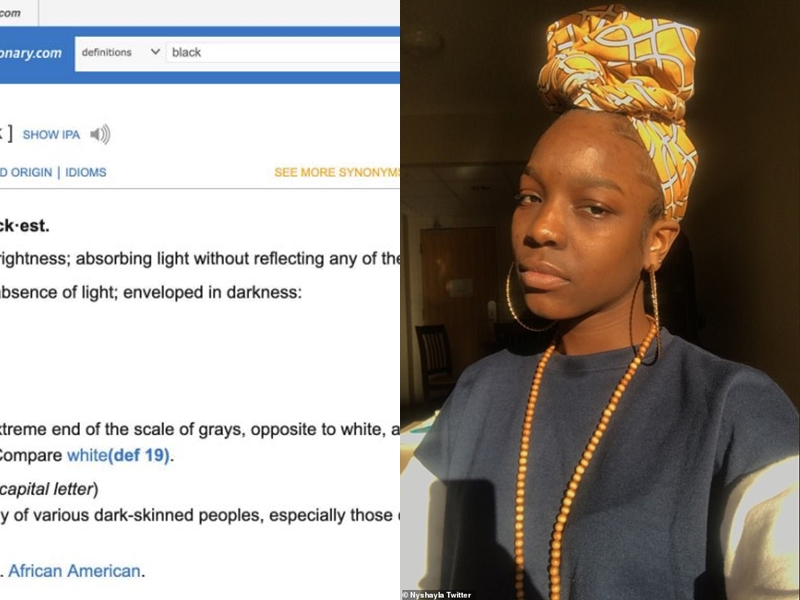 Online word site, Dictionary.com reveals plans to update the definition of the word ‘black’ after being branded racist by a young black lady

Online word site, Dictionary.com has revealed its plans to update their definition of ‘black’ after being branded racist by a young black lady.

21-year-old Nyshayla Barnes, an artist from New Jersey, took to Twitter to express her discomfort at the words associated with the term.

Sharing a screengrab of the synonyms alongside ‘black’, she revealed how words including ‘dark, dingy, depressing, devilish and sinful’ were listed among others.

Reacting on her page, Nyshayla wrote: ‘There are offensive words in the dictionary associated with the definition of ‘Black’. It is vital that we have more positive meanings for this word because how we define words shapes our perception of them’.

And further explaining her point, she added: ‘We are not taking offense to the word ‘Black’. That is our identity. We have a problem with the other words that are associated with Black that don’t need to be associated with it at all’.

‘Rather than making words, such as ‘depressing’, ‘threatening’ and ‘foreboding’ synonymous to ‘Black’, we should instead use words that do not insinuate a biased undertone to a word that is commonly used to describe people of Black race and culture.’

US dictionary Merriam-Webster to change definition of ‘racism’

Replying to the thread, Dictionary.com revealed their plans to update the definition.

They tweeted: ‘We agree! We are making some updates and revisions that will be rolled out later this year.’